The Diva and the Perfumer: When Yuri Gutsatz met Estée Lauder (1969) 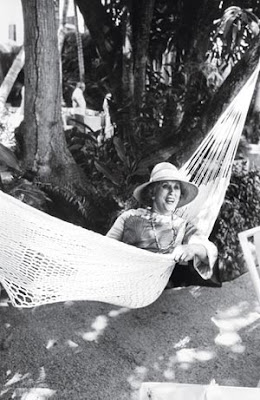 Le Jardin Retrouvé’s founder Yuri Gutsatz may not be a household name in perfume-land.

But the Russian-born perfumer (1914-2005) was both a player and a witness to a wide swathe of perfume history and fortunately for us, he loved to write. His son Denis, who now runs Le Jardin Retrouvé, has been posting on the brand's forum Yuri Gutsatz’s fascinating first-hand accounts of a career that took him from Marseille to Paris, then on to India and back to Paris, after a stint in the French Foreign Legion during WWII. A most welcome initiative since it allows us a peek into the wings of a secretive industry…

One of the more entertaining stories is that of Yuri Gutsatz’s disheartening encounters with Estée Lauder in 1969.

Yuri Gutsatz had been working since the post-WWII period for the man who may have single-handedly revolutionized the industry… Louis Amic was the one who sold couturiers on the idea of buying perfumes composed by Roure’s in-house team – a team which included such geniuses as Jean Carles and Germaine Cellier. Carven, Balmain, Balenciaga, Piguet, Ricci and Saint Laurent were among Amic’s clients, as well as a very promising young Spanish-born couturier called Emanuel Ungaro…

Yuri Gutsatz was commissioned to create Ungaro’s first signature perfume, to be produced by Estée Lauder: thus, he was summoned by the cosmetics empress when she came to Paris.

The perfumer had worked on an accord based on a gardenia-like flower he had encountered in India, locally called “keora”( Pandanus fascicularis) : its odorant principle was phenyl-ethyl-methyl-ether. It had a peculiar mushroom, green-metallic note. Ungaro fell in love with it.

As Louis Amic had told him that Madame Lauder intended to mix the perfume herself – she had always claimed she composed her fragrances – Yuri Gutsatz was to bring semi-finished versions so that she could have her way with the vials. She wanted an Heure Bleue or Bal à Versailles type.

The “flamboyant” Lauder received him at the Parisian hotel Plaza Athénée with her entourage, including a hairdresser and several hotel staff. And, sure enough, she started mixing her own cocktails…

“Brushing away my offer of measuring glass, [she] started mixing without sense of proportion the above 5 concentrates, 2 by 2 or 3 by 3 in empty bottles. Then she compelled all people present to smell rapidly her mixtures and to smear the oils on their hands and forearms and to comment upon instantly”, writes Yuri Gutsatz.

Lauder’s skin, he adds, was “an absolutely extraordinary phenomenon which in my 35 years of practice I have never encountered. A perfume lavishly spread on the back of her hand or forearms loses its smell within less than 5 minutes, leaving after 10 minutes a faint and blurred odor! (This explains so far I am concerned her 70% concentration YOUTH DEW bath oil and non alcoholic SUPER ESTEE Perfume).”

In the course of their four meetings – one of which took place as Madame Lauder was trying on outfits for a Spanish-themed ball at the Lido – she expounded her opinions on perfume and perfume-making, claiming to be the sole author of Youth Dew, Super Estée and Aramis. “If her dear friend Mr. Ernest SHIFTAN has become what he is today, it is only because he listened to her advice how to make perfumes.”

“The last time I had dinner with the Duchess of Windsor she told me that with my Super Estée I would teach Frenchwomen how to wear perfume”, added Lauder, who went on to put down the competition. Jean-Paul Guerlain’s new Chamade, she said, would be a flop (it wasn’t).

In Madame Lauder’s opinion, if the fragrance she tested didn’t garner universal compliments when she went out, it was worthless. When Yuri Gutsatz objected that no perfume could be universally pleasing, she retorted that “everybody loved Youth Dew”.

When she got back to the US with her samples, she bitterly complained to Amic: “Tell your Russian perfumer my husband doesn’t want to sleep with me anymore because of this perfume!”; “I had to throw my nightie from the window!” she added.

In the end, Yuri Gutsatz’s proposals were so deeply modified that they bore no resemblance to the original, and the project was scratched. But in 1973, Madame Lauder decided to launch it as Chromatics, “the metallic after shave”.

You can discover Mr. Gutsatz’s fascinating memoirs and writings on the Jardin Retrouvé forum, as well as his full report to Louis Amic on his encounter with Estée Lauder (in English).

I'd like to thank Denis Gutsatz for graciously authorizing me to quote from his father's memoirs.