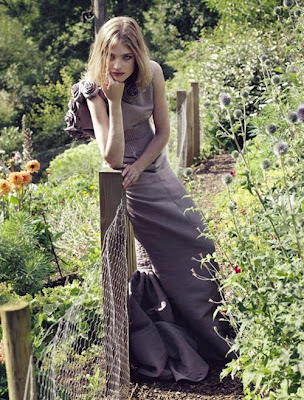 Lolita Lempicka always got their gourmands right. The cool anise-licorice-violet thrill of the first, eponymous scent has made it a contemporary classic. The warm orange-immortelle-vanilla kiss of the second, L, managed to avoid tooth-decaying sugar overdose with a pinch of salt.

How do you follow up on two runaway successes? First, you put luck on your side and stick the juice in a cute four-leaf clover-shaped bottle. Then, you throw caution to the winds and actually take a couple of chances with the perfume itself. Apparently, Si Lolita started out in life as a masculine fragrance, and minus one note – sweet pea – it could still easily fit the bill. Despite the girly polka dots and flowers of the box and golden curlicues of the flacon, Si Lolita manages to bypass obvious gender attributes to radiate a summery, heated-field-in-August charm, with a hint of that herbal bitterness you get from weeds sucked out of their sap by the sun.

The first impression is that of sun-licked skin drizzled with sweet mandarin juice, hopped up with the ubiquitous pink pepper and a darker, black pepper note that most likely comes from elemi, which also has herbal and lemon facets. The sweet pea note, purportedly the main feature of the scent, doesn’t smell much of the real flower, but rather (as Octavian Coifan explains in his own review) of the concept of sweet pea in perfumery (its essence can’t be extracted so it’s always an interpretation).

All through the development of Si Lolita, that honeyed, suave note plays peek-a-boo with the amber, tonka and(again ubiquitous) patchouli base, nearly getting choked a couple of times by the clove/nutmeg/carnation wafts of wallflower or smothered in heliotrope. At times, it feels more like the remnants of a particularly yummy sun lotion – somehow, it gives off a similar, sun-baked vibe to the discontinued Guerlain Terra Cotta Voile d’Été (now available in Les Parisiennes as Quand vient l’été).

If I had a qualm about Si Lolita (and again, Octavian states the same thing), it is that it’s a pretty low on sillage and lasting powers, unlike its big sisters. It doesn’t really carry out its initial intention and ends up like a lot of top-loaded, contemporary perfumes and thus, comes nowhere near the originality of the first Lolita or the confidently gourmand amplitude of the second.

But up against other current mainstream launches (yes, Idole d’Armani, I’m looking at your orange-berry-rose-patchouli), it stands out as a real charmer.