The Story of Eau in 50 Shades of Pink

Has the same brief been circulating in all the perfume houses? This spring, the industry seems to have given in to a severe H2O fetish. Not aquatic, mind you: there is nary a drop of calone to be sniffed. No: what’s put forward here is freshness, conjured both by the word "eau" (or "acqua") and by citruses or light spring flowers."Fresh" being the average consumers' tag for just about any fragrance they feel comfortable with, even the heaviest hitters, while "strong" is a polite way of saying "yuck".

In niche, two major houses presented their new cologne collections in Paris this week.  Annick Goutal, under the ownership of the Korean group Amore Pacific (which also owns Lolita Lempicka) but still under the creative direction of Isabelle Doyen and Camille Goutal, is ushering in new packaging along with a trio of cologne versions of Néroli, Vétiver and L’Eau d’Hadrien (the current Néroli and Vétiver will no longer be produced).
The LVMH-owned Acqua di Parma is also putting out a new cologne collection, Acque Nobile, composed by François Demachy, Aqua Nobile Iris, Magnolia and Gelsomino (jasmine). Not to be confused with the just-plain-Nobile line, which also features iris, magnolia and jasmine (one befuddled beauty editor muttered you’d soon be needing a PhD to keep it all straight).

Of course, both brands have a well-established legitimacy in colognes, with cult products like Eau d’Hadrien and Colonia.  Still, cologne seems to be trending in niche, something Atelier Cologne, one of the most successful new brands, has cleverly caught on by turning every note in the perfumer’s palette into a refreshing splash:  even the dusky grand dame of powerhouse scents is worked into a nautical theme in their latest, Mistral Patchouli.

As for the mainstream, it’s unleashing a veritable tsunami of fresh floral flankers, all dubbed after some variation on H2O, and almost all of them in various shades of pink. Might be the swing of the pendulum after last year’s slew of “intense” versions of best-sellers (off the top of my head: Gucci Guilty, Prada Infusion d'Iris Absolue, Paco Rabanne One Million and Lady Million Absolute Gold, Valentina Assoluto). While the industry’s craving for berries and caramel-coated wood is not quite abating (yes, Lanvin Me!, I’m looking at you), all these Eaux seem like a bid to capture the aquatics-loving market.

Narciso Rodriguez L’Eau for Her by Aurélien Guichard takes the original to the edge of the aquatic, with a “water flowers” accord of peony, muguet, cyclamen and mock orange.
Bottega Veneta Eau Légère adds gardenia to the lovely apricot and leather chypre blend of the original. But oddly, on my skin the faint iodic, almost algae note that lent it saltiness is somehow amped up in this new version, also authored by Michel Almairac.
Prada Infusion d’Iris L’Eau d’Iris crowns its top notes with deftly-handled mint: the effect is crisp, fresh and green rather than mouthwash, and steers clear of the sinus-clearing intensity of many mint-themed scents. L’Eau d’Iris also features an oleander note, defined by Daniela Andrier as “powdery” and “almondy”.  This limited edition is still very recognizably the huge, white, powdery puff of iris and musk of the original.

Even the sticky delights of the gourmands are being splashed with spring-like floral notes.  Prada Candy L’Eau has gone lighter on the caramel with an added freesia accord.  Lolita Lempicka is reincarnating into L’Eau Jolie, whose notes list (blackcurrant, pear, neroli, peach blossom) sounds nothing like the original, to say the least. Its distant offspring, La Petite Robe Noire, is coming out in an eau de toilette version with added jasmine and more citrus in the top notes.

Still going with the flow,  Balenciaga L’Eau Rose tugs Olivier Polge’s original violet towards the lipstick accord by adding the eponymous rose, also featured in Eau de Cartier Goutte de Rose. Not afraid of jumping in the pool:  Valentina Acqua Floreale  (Valentino) and Nina L’Eau (Nina Ricci), both signed by Olivier Cresp – who also authored the new Cerrutti 1881 Acqua Forte – and you’ve got more than a trend.  Oops! As I type this, the press release for Love Chloé Eau Florale is dropping into my inbox… And whoops!  A courier has just rung with a bottle of Roberto Cavalli Acqua…which breaks with the dress code by flaunting an aqua box.

I’m not passing olfactory judgment here, since I haven’t smelled the half of these more than once. Lots smelled lovely, and I’ve zeroed in on a couple of wows. But just to give them skin real estate, I’ll need to break out my swimsuit ahead of summer.If you hear a gurgling sound, please be so kind as to send a lifeguard. 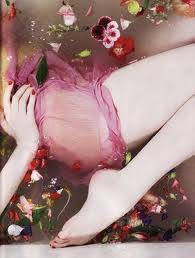 Serge Lutens, the Girl from Berlin and Tomorrow's Eve 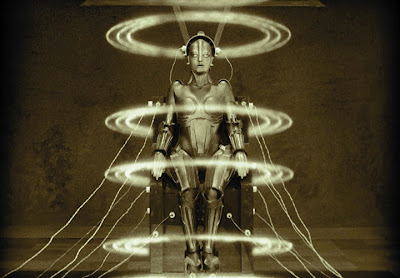 Serge Lutens’s launches are increasingly becoming apparatuses (the untranslatable French term dispositif would be more accurate) in which the fragrance itself is the core, but not the sole element at play. And none more so than La Fille de Berlin, whose press presentation was timed to coincide with the Berlin à Paris book and exhibition of Lutens’s photographs. The press release, penned as always by the maestro himself, was every bit as cryptic as its predecessors – as cryptic as a perfume formula to a layman, in fact. A black box of a text teeming with hints and half-whispered secrets about feminine identification (as he did with Billie Holiday for Une Voix Noire), solitude, fear, furor, crime and guilt…

Once more, the scene seems to be haunted by the ghost of the mother who apparently abandoned little Serge, seen in the text as a receding figure on an earth path… What has she got to do with Berlin? Lutens was born in 1942 in the midst of the German occupation of his native Lille… Does the name of the fragrance translate as “The Girl from Berlin” or “The Daughter of Berlin”?

Digging around in this black box -- this poetic dispositif – can yield rich chains of association which, in all likelihood, was Lutens’s intention. Cross the name of the scent with Lutens’s Expressionist inspiration as a photographer, and you land straight in the Weimar Republic. From there, follow the Rhine – Lutens does write of the Rhine-Gold, of lips dipped in Siegfried’s blood, of an armed maiden – from Wagner to Germany’s leading Expressionist filmmaker Fritz Lang, who adapted the myth of the Nibelungen in 1924…

What’s all that got to do with perfume, you say? Bear with me. Lang’s two Marias – the virginal worker and the robotic vixen – may well spring from an earlier figure of female duality, perhaps the first android in literature, imagined by the French Symbolist writer Villiers de l’Isle Adam in Tomorrow’s Eve (1886). In it, a fictitious Thomas Edison has invented a robot in the likeness of Miss Alicia, whose perfect beauty is flawed by a shallow soul, in order to save her lover from despair and suicide. This android, Hadaly, is animated not only by Edison’s clever mechanisms, but by the beautiful spirit of a cataleptic woman. A product of human artifice, Miss Alicia’s “twin” is more perfect – closer to the innocence of nature – than the corrupted original, who bears all the female flaws of our mother Eve…

This could already stand as a metaphor for perfume. But Hadaly, the quintessence of female perfection, is literally fed on the quintessence of nature, perfume, since she requires only a few drops of rose oil and amber tincture to “live”… And that’s where Serge Lutens’s Berlin-inspired rose channels Villiers’ android via Fritz Lang’s twin Marias, or indeed Brunhilde and Kriemhilde, who competed with each other for the love of a hero rendered almost invincible by bathing in the blood of the dragon he slew…

Rose. Rose and blood. La Fille de Berlin is the breath of Tomorrow’s Eve, a head-turning potion bursting with rich rose oil on fur-smooth animal notes… Are those claws or thorns at the tips of her fingers? Within the mouth-burning fruity jamminess, there is a hint of metallic-mineral effects, brought on by pepper, conjuring a drop of blood. This is a grand, dark, angry rose, potent enough to seep into the bloodstream, with the glowering radiance of a ruby in the rough. A warrior queen thumbing her nose at all the wimpy yet migraine-inducing roses drenched in laundry musks flooding the market. Poison and antidote.