The launch of Nina L'Eau by Nina Ricci... and a tender moment with Paloma 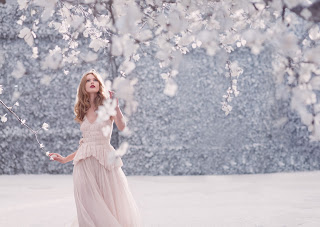 The best press launches have an element of emotion in them. That’s what imprints the event in the minds of journalists as they scurry from one venue to another. It can be as simple a particularly lovely chat with brand owners and perfumers – or anyone else involved in the project. Or it can be, as happened in Paris this week at the launch of Nina L’Eau, a tender moment with a magical creature straight out of a fairy tale.

The fragrance, composed by Olivier Cresp (Firmenich), is a fruity floral, leaning more towards the floral, with neroli, apple blossom and gardenia. The film, “Mon Secret” by Eugenio Recuenco, is a graceful, dream-like romp through the looking-glass and into a snow-white maze…But even though the model, Frida Gustavsson, is utterly lovely in her Nina Ricci couture silk muslin gown, the real star of the film for me is Paloma. 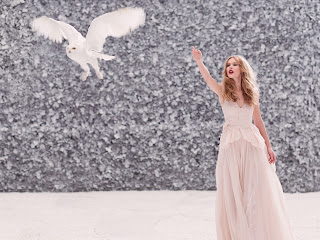 Paloma was one of three snowy owls used in the film, along with Igloo (who perched in a room just being her stately self) and Snow (who was off on another shoot). Paloma was there with her handler, and we were each invited in turn to don his hawker’s glove for her to perch on our arm. She was a chatty little diva, mewing and flapping her wings. Sometimes, perhaps because the person holding her was nervous, she tried to fly away but of course she was on a tether and flopped down until her handler gently picked her up and soothed her. Then she kind of nipped at his shirt as though she were cuddling.

When my turn came, Paloma settled on my arm and her white wing brushed my cheek as she flapped to right herself. Her handler told me to scratch her behind the ears and above the eyes, so I did – an entire life’s training as a cat slave came in handy – and she tilted her head towards me, half closing her huge fiery eyes … If she could have purred, she would have done it. And there she stayed, quietly enjoying the scratching and stroking of her silk-soft feathers, until I remembered other people were waiting for their photo op. 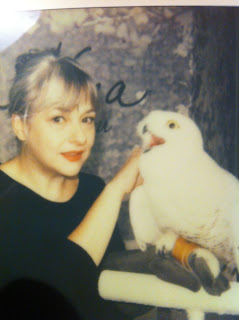 The snowy owl is actually the national bird of my native Québec, so that this beautiful young creature is a bit like my totem. And that wide-eye look you see here is not nerves or fear: it’s pure wonder. 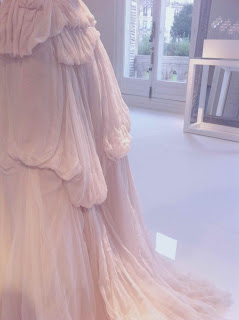 Don’t forget the review and sample draw a couple of posts down: it’s on until next Monday.

The two top pictures of the making-of the film come courtesy of Nina Ricci. The bottom one of the dress is my own. My portrait with Paloma is a Polaroid, because a Polaroid is even better than Photoshop at making people look better.
Posted by carmencanada /Grain de Musc at 09:00