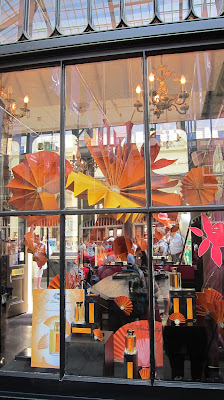 Going to London with Bertrand Duchaufour for the launch of Séville à l’aube at L’Artisan Parfumeur’s Covent Garden Market boutique felt like the final mile of a marathon I'd been running for two years and a half.  There will be other presentations, other launches (The Perfume Lover is coming out next March in the US, Canada and France), but now that the fragrance is out, well… oof!

Though Bertrand obviously reread the manuscript in progress to make sure there were no inaccuracies, we’d never actually debriefed our collaboration. Aboard the Eurostar taking us to London, we decided that we wouldn’t script or rehearse our presentation. So that we made up our narrative in front of a live audience. Given the unusual circumstances of the birth of Séville à l’aube, our presentation strayed from the classic pitch given at perfume launches and took on the form of a two-voiced tale: Once upon a time, a Perfumer met a Writer and they embarked on an epic creative journey where the relationship between raw materials and the story of a night in Seville during Holy Week, of raw materials between themselves and of the two creative partners was rife with obstacles, conflicts, surprises, moments of discouragement and epiphanies... 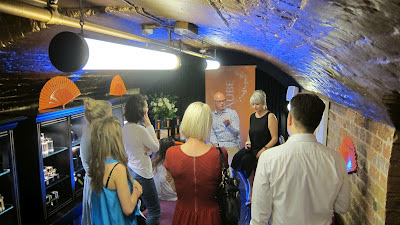 I'd given the story. Bertrand had the idea to make it into a perfume. But for once, he was travelling to a place where he’d never actually been: it was up to me to take him to Seville during Holy Week purely through my words and my reactions. To make sure he stayed faithful to the story, in other words to his own initial, gut-level intuition, despite the difficulties.

During this London presentation, I actually discovered a number of things he’d never told me. For instance, while I’d been disappointed by his first submissions, I had no previous experience of a fragrance development and was very prudent in my reactions: for all I knew, that’s how things were done, and all formulas started out as ugly ducklings. He revealed he thought those first submissions were awful. Orange blossom and incense have common mineral notes, which he thought would make them go together well, he explained: but they overlapped so much they were gobbling each other up. He spent weeks and months trying to perfect the accord, until he asked me a fateful question: “Do you know what you want?” 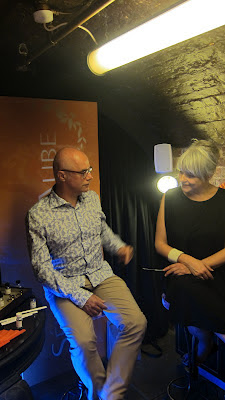 Up to then I had considered that my role was giving him my story then chronicling the development of the fragrance for the book. I was almost angry when he asked me to weigh in, since I was neither his client, nor an evaluator or project manager. In London he finally admitted he’d asked me because he was lost – at the time, he’d said “I know perfectly well where I’m going”! That’s what’s in the book, and I have a recording to back it up… It took me several weeks to answer. That’s when I went back into my story to retrieve Habanita, the fragrance I was wearing in the scene that had captured his imagination: I'd mentioned it before but he wasn't ready to listen. The balsamic tobacco oriental accord he derived from it was what was needed to get the orange blossom and incense to play nice. I also brought back a submission we’d rejected very early on because it had both better green top notes and a sensuality that was missing from his current mods.That was the day I went from scribe/human blotter to creative partner. 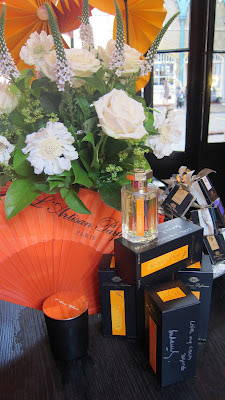 During the presentation, Bertrand stressed that he was trying to mirror my emotions as much as my original story. And when he found the ingredient that tied together all the notes, those emotions came through. That was Luisieri lavender, a type of lavender with balsamic, tobacco, cistus and incense aspects which had just been introduced to the market as a fine fragrance ingredient. It was presented to him at the very moment he was struggling to find a note that would act as a “catalyst”, a vertical axis, unifying all the accord: the citrus/green top notes, the orange blossom and beeswax heart, the resinous balsamic tobacco base. He says chance; I say serendipity! After all, the Luisieri is also called Seville lavender, so that our story called (for) it… And that’s when I could let go of evaluating: when true emotion came through in the form of a spontaneous “Yes!”

As someone in the audience pointed out, it’s almost as though Séville à l’aube used me, Bertrand and L’Artisan Parfumeur to come into existence. That’s what works of art do: they impose their own criteria, their own necessity. Séville à l’aube was never made for me. It happened with me and through me… Now that it’s out, I’ve had a few chats with L’Artisan Parfumeur sales assistants in Paris and have been told they’re getting a lot of impulse purchases. People who’ve never heard of me, my book or even Bertrand are falling in love with it.


The Perfume Lover: A Personal History of Scent is published in the UK by HarperCollins. To order a copy, click here.
The U.S. and Canada editions will be out in March 2013. Séville à l'aube is already available in France and in London, and will be launched internationally in September in a limited edition, due to the specific qualities of certain raw materials.
Posted by carmencanada /Grain de Musc at 19:00