"A lump of who knows what"... Notes on naming perfume notes 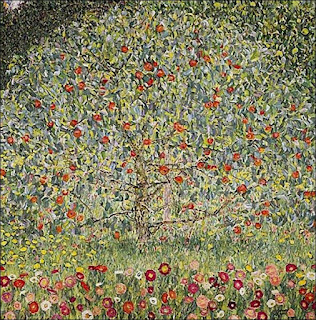 “In the first contact with a foreign land painters have all the advantages; lines, colour, what a whole and one that presents itself immediately! This block of who knows what, that’s nature, but objects, no, none whatsoever. It is only after a long, detailed scrutiny and a determined point of view that we reach the name. The name is an object to detach. (…)
Listen to visitors at an art show. Suddenly, after a long struggle, someone points at the painting: ‘It’s an apple tree’, he says, and you feel he’s relieved. He’s detached an apple tree from it! Now there’s a happy man.”

The French poet and artist Henri Michaux (1899-1984) wrote these lines in 1927 in Ecuador: A Travel journal. I read them after a brief exchange with a fellow perfume lover about Séville à l’aube: he scrunched his face over the blotter and started rattling off names of what he thought were the raw materials. Not necessarily the reaction one hopes for when presenting one’s brainchild, and one that made me understand a bit better the slight annoyance perfumers or brand owners may feel when a review is all about parsing the notes.

We’ve all indulged in the apple-picking routine: connecting smells with words surely satisfies some encrypted urge to make sense of the “block of who knows what”. In another post, I’ve linked this with the satisfaction of reading a whodunit: in the same way as a detective arriving on a crime scene, in the finished perfume we are confronted with a fait accompli and our mission is to find out how things got that way. Michaux draws a parallel between making sense a strange new place and contemplating a modern painting. You could apply the same reflection to perfume.

Niche was a tremendous factor in fostering fragrance writing, not only because the products on offer were often more distinctive, but because most brands followed the “solinote”, figurative trend ushered in by L’Artisan Parfumeur and Diptyque, then Annick Goutal and Serge Lutens. Analysing something called “Vetiver”, “Ambre” or “Tubéreuse” is a damn sight easier than parsing the notes of a mainstream abstract: you can hang on to the branches of the "apple tree "and shake out more words. That said, though picking out notes is no easy exercise and requires a certain amount of training, ultimately, it’s just that: training. Recognizing the apple tree is as satisfying as pulling off a magic trick. Still, the point isn’t to recognize the apple tree, but to ask why that particular rendition of an apple tree is beautiful (or not). In which way it belongs to the “block of who knows what”; what light it sheds on the landscape.

I was recently invited to the presentation of a mainstream fragrance made by the head of a pastry school in Barcelona, who had created a dessert out of the olfactive pyramid of the scent. His first step was to blindfold us and give us two connected ingredients. He didn’t want us to recognize them: in fact he pointedly asked us not to name them if we did. What he was wanted us to do was to qualify the smells, and then to deduce, based on those qualities, why one ingredient was chosen over the other by the perfumer to achieve the desired effect. I suppose this is what he does with his students: it is, in fact, an exercise I came up with as well in my perfume appreciation course, asking students to blind-smell real things, qualify them, then relate them to facets of raw materials.

Qualifying smells, looking for the adjectives rather than the noun, is what perfumers do when they are pondering a raw material. The connections that will allow them to build a form are in the “adjectives”. This process may bypass verbal words, since a skilled, experienced perfumer may think directly in “smell-words”. You could say it’s a way of weaving the apple tree back into the landscape; of seeing what other forms can be pulled out of it, so that it is no longer just an apple tree, but a web of branches, roots, leaves and fruit into which we can read a story…

Can we do away with parsing notes when writing about a fragrance? Probably not. First because of the very real pleasure the “eureka!” moment provides the writer and reader. Then because there’s got to be a common ground of references for a write-up to be intelligible. But also because the name of each note opens onto a small world that’s not just about smell but cultural/personal references, and enriches the scent with a new layer of meaning.

It would be an interesting writing experiment to build the foundation of a review with all the notes, than take away the scaffolding to keep only the metaphors. How many different stories would that experiment yield if carried out by a number of writers?