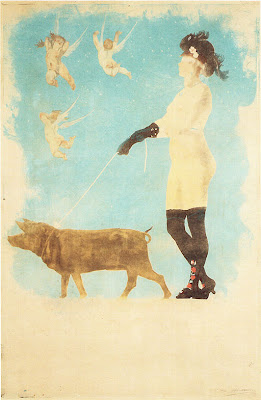 Of course, in defining perversion and classifying its manifestations, psychiatrists were echoing the shifts in perceptions and practices of Western societies. In a world where commodities were becoming increasingly available and diversified, the sex industry had started catering to “niche markets” by providing specialized services and ever more spectacular erotic scenarios. Havelock Ellis reports the case, in 1894, of a prostitute stating that “several of her clients desired the odor of new shoes in the room, and that she was accustomed to obtain the desired perfume by holding her shoes for a moment over the flame of a spirit lamp.”
Thus, leather entered the vocabulary of perfumery as a dominant note, rather than as a material to be treated by perfume, at the precise period in history in which hitherto “aristocratic” perversions trickled down to the very bourgeoisie to whom Messieurs Guerlain and Rimmel sold their Cuir de Russie.

But by that time the word “fetish” had acquired yet another meaning, “commodity fetishism”, introduced by Karl Marx as early as 1844 and developed in Das Kapital (1867). Again, this is a displacement of the initial definition of fetishism as the attribution of supernatural properties to man-made objects. In Marx’s definition, it means attributing an intrinsic, “natural” value to an object which initially has none. This ultimately leads to a personification of commodities, which come to possess quasi-magical powers; it also severs them both from their conditions of production and from the individual who owns them. For instance: the gowns of a society lady in the 19th century were made for her by a dressmaker. They had no labels. The beauty of an outfit was an outcome of the refined taste of the woman who wore it. When Charles Frederick Worth opened the first couture house in Paris in 1858, the couturier became the author: a Worth gown acquired value independently from its wearer, and indeed it bestowed value on her.

“She stole for the pleasure of stealing, as one loves for the pleasure of loving, goaded on by desire, urged on by the species of kleptomania that her unsatisfied luxurious tastes had developed in her formerly at sight of the enormous and brutal temptations of the big shops.”

Perfume was born in its modern form during the very decades in which fetishism was defined by psychiatry, described by literature and sexually exploited by commerce, both directly (in the specialised brothels catering to the men of the bourgeoisie) and indirectly (in the dazzling cornucopia of consumer items offered to their mates).
But because of its invisible, quasi-immaterial nature, fragrance requires even more spectacle than clothing or accessories to become an object of desire. In the olden days of maîtres gantiers-parfumeurs, fragrance was an artisanal product, blended by master tradesmen. But only once the development of organic chemistry allowed perfumes to be manufactured industrially, perfume-makers could no longer rely on the one-to-one relationship of a favoured supplier with his clients. In The Ladies’ Paradise, their products had to speak for themselves. Or rather, perfume companies had to devise magic lanterns to transmute their industrial products into the stuff women’s dreams were made of.

In the first decades of the 20th century, the world-famous Paris couturiers would become the perfume industry’s most efficient promoters, turning “French perfume” into the ultimate consumer fetish. And so the spectacle of commodities conceived under the hyper-materialistic reign of Napoleon III would find its most accomplished expression in fragrance marketing and advertising.

So what’s it all to do with leather? Possibly not much, beyond the fact that the glove that kick-started the French perfume industry in the Renaissance has allowed me to wrap the threads of sexual and commodity fetishism around a bottle of perfume… But I suspect that many more threads could be woven into this eminently reversible object.

Apart from the quoted authors, these posts were fed by Octavian Coifan’s articles on leather notes (1000fragrances), my interview with Elisabeth de Feydeau for The Perfume Lover and Alain Corbin’s Women for Hire.