Getting the Axe (Anarchy for Her) 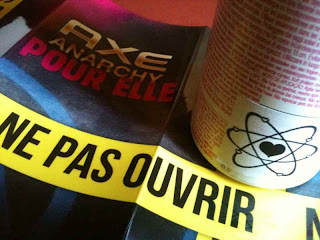 I must have gone viral. All of a sudden I’m spending part of my day deleting press releases for everything from cars to MP3 file-sharing sites and samples sales, and unsubscribing from the mailing lists of overzealous PR agencies who clearly don’t take the time to identify whose inbox they’re crashing.

But one email did intrigue me enough to investigate. It was from the Buzzman agency, addressed me with the informal French pronoun “tu” and told me they had a gift for me that wasn’t on the market yet. The date and tone were right for the buzz campaign to be about the brand-new Axe Anarchy for Her, and bingo! Axe was indeed among the agency’s clients, which was confirmed by the nice young man writing to me as though we’d been in high school together (like, last month).

I duly received a box containing my canister of Axe Anarchy for Her (and to think the mailman doesn’t even bother to ring when I get a parcel of vintage perfumes samples…). Enclosed was a gaudy flier explaining I was so burning hot I’d been selected for a special mission: unleashing chaos, by virtue of mixing my Axe Anarchy for Her with my male counterpart’s. I was to trawl social networks looking for the guy whose pictogram matched the one stuck on my can (see above). Chaos would ensue when we hooked up at the Anarchy Party on March 1st in Paris.

For the sake of science, I did take a snootful of Axe Anarchy for Her. The scent is a round-up of usual suspects. A soapy rosy floral accord (listed as cyclamen, magnolia, orchid and lily-of-the-valley) crushed between a vivid pear-melon note drenched in syrup and a vanilla and musk base. It’s pretty decent, actually: no better or worse than most pink juices sold in beauty emporia, and sold at a fraction of the price. What’s anarchic about an aquatic fruity floral gourmand I can’t fathom though – it’s certainly less aggressive than the spiky woods cloud most Axe sprays waft. In fact, it’s about as tame as a Hello Kitty crayon case.

Still, much as it pains me to think that some boy expecting a hottie-with-matching-pictogram at the Anarchy Party will be stood up by a woman old enough to have bought the Sex Pistol’s Anarchy in the UK when it came out, I’m afraid couldn’t consider attending, even in a hazmat suit.