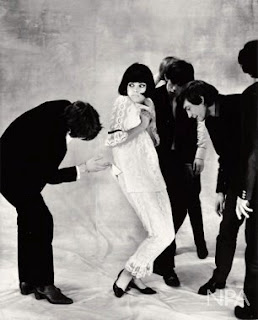 The most romantic perfume-related scene I’ve ever lived didn’t really happen to me. The ghost of a stranger’s lost love was clinging to my skin... As I was walking the boulevard Saint-Germain, an elderly gentleman went by, slowed down, turned around and murmured: “Habanita!” There was a whole novel in the way he spoke that word.
Habanita was this man’s past. It was my future, since it remained my signature scent for over five years. I’ve sometimes wondered whether some man, smelling it today, would remember me with a pang and a smile. Think about it when you’re wearing something new: perfume is also a future memory.

If compliments are a tribute to the pleasure you’ve given, this scene from the past might just be the loveliest compliment I’ve ever received on a perfume. Remembering it made me think of other fragrances I’ve worn that have attracted compliments from strangers, and of the reasons why those particular notes elicit such a positive reaction, which in turn gave me the idea for  the theme of this winter Top 10, falling as it does on Saint-Valentine’s day…

What turns a fragrance into a compliment magnet? I’ve whittled it down to two very simple criteria. One, the scent has to be diffusive, obviously, for it to be noticed. Two, it shouldn’t stray too far from the cultural codes (in my case: feminine). I’ve found that often, the more offbeat stuff tends to not even register as perfume whereas florals and orientals, the most overtly feminine genres, always elicit a reaction. So here’s my selection, based on my own collection.

Attrape-coeur by Mathilde Laurent for Guerlain, aka Guet-Apens, aka Vol de Nuit Évasion and sadly discontinued in all its guises. The familiar Guerlinade melody on a smooth-as-caramel tribute to De Laire’s famed Ambre 83, a labdanum and vanilla base – vanilla being a smell that raises a blissful smile in humans from infancy since it echoes the aroma of maternal milk. This is the scent that prompted a young Tunisian bellboy to run after me saying “Madame, madame, what’s your perfume, it smells so good!” After hearing the name, he answered “Well Attrape-coeur has caught another heart.”

Boucheron by Jean-Pierre Béthouart and Francis Deléamont for Boucheron. A sparkling, big-boned floriental from an era when perfumes weren’t afraid of making a statement. Scores additional points for triggering a pleasurable pang of recognition.

Une Fleur de Cassie by Dominique Ropion for FrédéricMalle. Though a bit of an oddball with its leathery-animalic notes running under its sweet almondy cloud, like all of Ropion’s opus this is a sillage monster, and one that prompted a gentleman who’d held open a door for me to turn back and catch up so he could ask what I was wearing.

Carnal Flower, ditto.  Tuberoses are entrance-making flowers that’ll tattoo your presence all over a room and your Valentine’s body, whether it is Dominique Ropion’s naturalistic rendition, the baroque Tubéreuse Criminelle, the boho Vamp à NY or the uncanny Nuit de Tubéreuse. Latest compliment to date from both sales assistants in a flower shop, where the bottled tuberose took on and tackled ever other blossom.

Songes by Isabelle Doyen and Camille Goutal forAnnick Goutal. The dark-eyed, sharp-suited gentleman I had a business appointment with came into the room and said: “Wait, don’t tell me, let me guess… Jasmine… vanilla…and tiaré, right?” Spot on. The man spent an hour in tropical bliss.

Gardénia Pétales by Nathalie Feisthauer for VanCleef and Arpels “Collection extraordinaire”. Another white and tropical floral bouquet, a tad less exuberant than Songes but just as much of a sillage monster. Matched with cleavage, caused a fellow wedding dinner guest to ask if anyone ever looked me in the eye.

Kiss Me Tender by Patricia de Nicolaï for Parfumsde Nicolaï. No list of compliment magnets would be complete without a nuzzle-my-neck gourmand note. Kiss Me Tender’s sugar-coated almond and white flower accord is delectable enough to prompt either a lick or a bite.

Putain des Palaces by Nathalie Feisthauer for État Libre d’Orange. With its retro lipstick violet-rose accord smeared on a funky animalic base, the “Five-star hotel call girl” flaunts another olfactory emblem of utter femininity. Bonus points for being diffusive enough to prompt the question “What’s that perfume you’re wearing?”, just for the fun of answering.

But when I’m asked about my latest compliment magnet, I just smile and say it’s not out yet…  This is a very special perfume to me. So special it’s the closest thing I’ve ever had to a signature scent since I wore Habanita. So special, in fact, that it warrants its own post.

Click here to learn more about my mystery scent.

Meanwhile, I’d love to know what your top compliment grabbers have been…