My Top Ten Perfumes for Fall 2011: The Halloween Edition 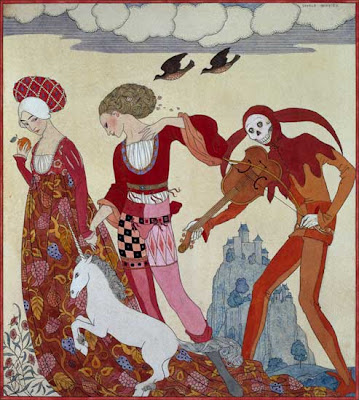 A few years ago, the retail industry tried to promote Halloween in France, but it never quite caught on. So it’s been decades since I caught the sight of a trick-or-treater. I do, however, remember the combination of fun and disappointment of the few Halloweens where I went out in disguise. The fun was thinking up the costume. The disappointment was that it never actually transformed me into a superhero or a Gipsy dancer.
Part of the pleasure of perfumes is slipping on different personas, invisible disguises that send my inner little girl into raptures.
So this is what I’d wear if I wanted to dress up as…
The Ghost of Glamour Past: Mon Parfum Chéri, Camille Goutal and Isabelle Doyen’s tribute to old-style chypres, has the earthy glory of a vintage gown exhumed, torn apart and reassembled by a little girl on a sugar high.
A Replicant: If androids dream of electric sheep, do they woo each other with packing tape flowers? Comme des Garçons’ “New Perfume” by Antoine Lie and Antoine Maisondieu grafts subversive industrial smells on the nostalgic charm of a lilac and sweet pea bouquet.
A Hindu Goddess: You’d want six arms too, just to douse yourself in Trayee, Bertrand Duchaufour’s take on the scents of Vedic India for Neela Vermeire Créations. A deep, smoky, spicy, resinous potion which develops balsamic, arm-licking facets.
A Fauness: Vero Kern’s Onda in eau de parfum takes her dirty, bawdy, foresty brew into ever so slightly more civilized territory, with the animal notes toned down and replaced by passion fruit, which adds its touch of raspy, sulfurous devilry. But I’d add a dab of the parfum between my horns.
The Devil: An urbane creature with a quill pen and parchment for you to sign away you soul, the Devil sports Marlene Dietrich top hat and tails, and wafts François Demachy’s ultra-refined, yet troublingly animalic Patchouli Impérial for Dior Collection Privée, a modern take on Bois des Iles dipped in civet and amber.
A Fairy: Obviously, Mathilde Laurent’s Baiser Volé, conceived with a flighty, coquette but iron-willed fairy in mind: a confidently femme lily in a cloud of face powder rather than a wimpy sprite sprinkled with fairy dust.
A Sultana: With a, Ballets Russes Scheherazade get-up, I’d spray on Marc-Antoine Corticchiato’s vivid brew of candied fruit – date and prune – macerated in booze and aphrodisiac spices. Aziyadé for Parfum d’Empire is Femme gone full-on native in Constantinople.
A chocolate-drunk trick-or-treater: Thierry Mugler’s new Angel eau de parfum sublimée de cacao amer isn’t just a mouthful to ask for at the counter. It's like being sprayed with Angel before being rolled in cocoa powder. And it is possibly, with its sister Alien eau de parfum sublimée de beurre de caramel sale (that’s “salty caramel butter”), a fragrance that should be sold along with wooden stake or an exorcist's book. Delightful, but it'll haunt you for days.
A hot pink trick-or-treater on a candy high: Daniela Andrier’s Candy for Prada, obviously, the chicest take on the note this side of Pierre Hermé’s crème caramel au beurre sale, and really actually a delicate benzoin and musk scent. Despite the girly trappings, I find it very irrésistible.
Cinderella in her pumpkin carriage: Phaedon, the new brand produced – but not composed, except for two scents -- by Pierre Guillaume, was presented last week at Sens Unique, a new multi-brand niche store in Paris. He made me sniff a rather delicious candle called Carrosse, a vividly realistic pumpkin and orange blossom accord, whose name means “carriage” and is clearly meant as an allusion to Cinderella’s vehicle of choice. Mice not included.
And now, on to you: If you were to wear a disguise today, what would it be? And what perfume would you wear to immerse yourself in your character?
For more Top Tens, check out the usual suspects:
Bois de Jasmin
Now Smell This
Perfume-Smellin' Things
Perfume Posse
Posted by carmencanada /Grain de Musc at 01:51