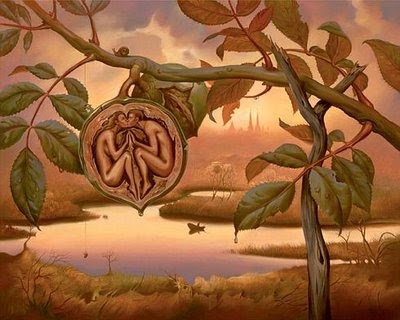 More and more consumers question the provenance and quality of their food: it was only logical that this attitude would shift over to fragrance at some point. This is why Hermès goes through the trouble of sending Jean-Claude Ellena along with a film crew all the way to Kerala to promote Un Jardin après la Mousson, even though the man (filmed with his blotters and vials on a boat as though he were literally composing during his trip) might as well have done the whole thing safe and cosy in his lab in Cabris: to establish some sort of traceability. And this is why one of the most frequent questions customers ask sales assistants at perfume counters is “Is it all natural?” even though most people peg an artificial fruit aroma as the real thing, choosing it over the actual extract. They want to think they’re buying a fragrance that’s made up of things that were actually alive at some point. Fair enough.

Perfume has always been something people buy based on their aspirations and dreams. Whether what makes you dream is Beyoncé, Jean-Claude Ellena in the Indian monsoon or cool, funky people picking wild cherries on May 24th in the Hérault valley is entirely up to you. The dream isn’t added value: it’s what you breathe in at the same time as your sillage. And perfume isn’t what’s in the bottle: it’s the perfumer’s story, added to yours.

And Sharini Parfums Naturels, a small outfit based in Aniane, a gorgeous little village near Montpellier, has a lovely story to tell. Not only does the spectacularly bearded and mustachioed Nicolas Jennings source exclusively organic materials, but he also produces several of them. Graines de Paradis (“Paradise Seeds”), his work for The Mystery of Musk, contains a few of these “made in Sharini” materials. This undoubtedly adds to the charm of his fragrance, something Nicolas Jennings is clearly aware of since he provides all the details on the Sharini website. Four of his floral essences – tiaré, neroli, jasmine and broom, the latter personally harvested by him – were extracted with the gentle, traditional, painstaking method of enfleurage, laying blossoms on coats of non-scented fat, and replacing them until the fat has absorbed enough essential oils. Other materials (wild cherries, Rooibos red tea and vanilla) were obtained by tincture: soaking them in alcohol until it is sufficiently saturated with their aroma.

There must be something immensely gratifying in being part of the whole chain of production, pre-Industrial Revolution style: the fields, the harvest, the slow process of coaxing plants into giving up their spirit, the blending… And this tender, holistic approach has somehow seeped into Graines de Paradis. There is a generosity and a lushness to it that seems to capture the soul of the blossoms that gave it (their) life…

After an initial effervescence that reminds me of some of my favorite winter fruit salads (mandarins and grapefruit steeped in fresh ginger), the scent quickly veers into a sweet floral blend. The cognac, vanilla and cherry, with its almond facets, lend an almost caramelized flavor to the honeyed accord of broom, linden and orange blossom. This orange blossom honey effect lasts for hours, relayed by a jasmine-sandalwood accord. Patchouli, oliban and aged agarwood are also listed in the notes, but don’t express themselves particularly strongly (I think the formula could have been even shorter without affecting the effects sought out), whereas the vegetal musk duet of ambrette and angelica suffuse the scent throughout. This is what ties in Graines de Paradis with the “Mystery of Musk” theme: it is far from being an all-botanical, organic rendering of the musk note, but it does offer an interpretation of a slightly gourmand musky floral.

Graines de Paradis has a lazy summer afternoon sensuousness to it, a decent amount of sillage and, due to the “heavier” base notes, a good longevity. I picked it out as the one I would be giving away for the draw before trying out all of the Mystery of Musk submissions, because I thought that being shipped within the borders of France, it didn’t run as many risks of being stolen or damaged in transit. I’m glad I did: I’ve been enjoying my little holiday to Nicolas’ paradise in the South of France.

Just drop a comment if you want to be entered into the draw for Sharini Parfums Naturels Graine de Paradis: it is a rare opportunity, as there are only 25 bottles produced!


Illustration: Walnut of Eden by Vladimir Kush, sourced from Femmefemmefemme.