The Mystery of Musk: Perfume by Nature's Craving (or Chocolate is some kind of animal) 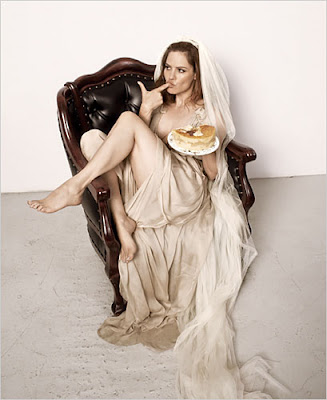 Ambrosia from Perfume by Nature looks like a perfectly lovely, kind and charming lady… But I suspect she’s just a wee bit evil. Her perfume is called Craving. It should be renamed Gluttony, in the fullest, Nigella Lawson, chops-and-finger-licking meaning of the term. And gluttony, you know, is one of the seven deadly sins… Unlike many of the natural perfumes I’ve been sampling, Craving doesn’t fall apart on the blotter. In fact, it might inspire you to chew up that blotter – so imagine the effect on skin. It was all I could do not to sprinkle the contents of the vial on anything soft and creamy that could actually be devoured without running foul of the law, or not to rush out to the corner patisserie, which is unhelpfully open on Sundays. Ambrosia, think of my hips!

With its roasted nut accents and sandalwood adding a milky-smoky touch, Craving is too much of a gourmand to actually rate as a musk in my book, but Ambrosia has well understood the profoundly animalic nature of its core material, cocoa absolute. Some musks actually do have chocolate facets, and castoreum definitely carries more than a whiff of dark chocolate. She’s also sussed out the common facets between dark chocolate and vetiver (also expressed in Lalique Encre Noire), and has used the latter to tug the formula out of purely foody territory, adding another layer of darkness to the chocolate and caramelized nuts.

The actual animal note in Craving is hyraceum, the stuff I though was driving my Siamese girl wild. It isn’t, since she didn’t turn into a wanton minx when she took a sniff of Craving. I can’t say as much for her mama, though my libido was distinctly more attuned to getting a sugar high than mauling the friend who was with me (thank God: I doubt our friendship would’ve survived it). Whether you find that the Craving in question veers more towards sex or chocolate (good substitute, never have to worry whether it’ll still respect you in the morning, and call you back the next day) is a matter of personal settings.

Meanwhile, Ambrosia, if that bikini makes me look like a muffin, I’ll take it up with you.


The draw for Graines de Paradis by Sharini is now closed. The winner will be announced on Monday.