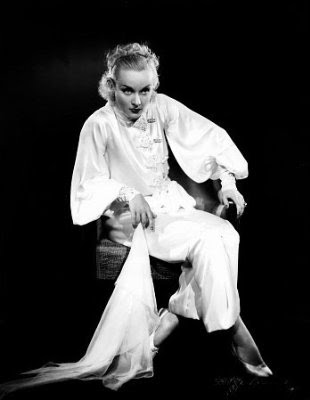 I’ve had a flacon of vintage Nuit de Longchamp of indeterminate age – could be anything from the 50s to the 70s – for quite a while, but I was never much drawn to it, mostly because the aldehydes and bergamot have turned. So I didn’t have much of a preconceived idea of the fragrance when I stumbled on the Lubin display at the niche corner of the Parisian department store Le Printemps.

It was swoon at first sniff… A chypre, with the unmistakable, canonic trio of materials -- bergamot, labdanum, oakmoss – shoring up a billowing cloud of white florals. A good old fashioned, honest-to-goodness chypre. It felt like coming home.

Launched in 1934 to celebrate the first nocturnal race at the Longchamp hippodrome in Paris (sourced by Scentzilla), Nuit de Longchamp has the supple sensuousness of a 1930s bias-cut white silk-satin gown. It unfolds at the fluid, graceful pace of a classic, with, from the juicy, almost mouth-watering bergamot dipped in creamy ylang-ylang of the top notes to the soapy, chiffon froth of orange blossom and jasmine. The rich balsamic base – of Tolu and Peru balsam -- brings a woody, vanilla-cinnamon note to the blend, whipping the earthiness of the patchouli, vetiver and oak moss into an almost caramel-like smoothness – a hint of golden flesh under pearly ripples of satin. A whiff of something that reads like incense, but that could be the cool medicinal hint of cardamom playing off the smokiness of the balsams, weaves in and out…

According to Lubin’s owner Gilles Thévenin, Nuit de Longchamp’s formula -- whose author remains anonymous --, as found in the archives of the house of Lubin, was somewhat altered by Lucien Ferrero and Henri Bergia of Expressions Parfumées. As far as I can tell from my much-altered vintage bottle, it is still fairly faithful to the original in tone, and certainly no effort has been spared in the year-long reformulation of this classic aldehydic floral chypre.

The overall effect is as utterly ravishing, poised and graceful as 1930s stars Constance Bennett, Myrna Loy or Carole Lombard (just before they break into some goofball comedy caper). In fact, Nuit de Longchamp very much gives off that married, chic and witty vibe that is so delicious to behold in 1930s comedies: it is womanly without being matronly, and just vivacious enough to hint that there is indeed a life, and a thrilling one at that, to be had in formal wear – not so much a night at the races as a racy night…

Next episode: Thursday, a review of L de Lubin