Azzaro, with or without Couture 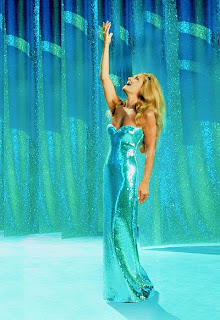 I had the pleasure of spending an afternoon with Loris Azzaro in his Paris apartment, two years before he passed away in 2003. The occasion may have been the launch of some flanker for Chrome. As I recall, we didn’t spend a second discussing it but rather, spent a long time evoking the spectacular women he’d dressed – from Claudia Cardinale to Isabelle Adjani, his jersey designs seemed particularly suited for smolderingly exotic beauties --, his youth in Tunisia and the opera.

The dashing, snowy-haired, blue-eyed designer had a treasure trove of rare recordings, which we listened to in his shagreen-panelled bedroom, on his impossibly soft petit-gris fur bedspread which must have been pure heaven to roll around naked in (I didn’t). This man knew how to live.

When the conversation turned to perfume, I told him I had worn his first fragrance many years ago, and regretted its discontinuation. Whereupon he produced a plain factory atomizer: he still had it produced exclusively for his use, and for gifting a select circle of friends…

This is the fragrance, initially launched under the name Azzaro in 1975, which was recently re-launched, re-named (it is now Azzaro Couture) and extensively reformulated by Aurélien Guichard, who seems to be specializing in those modern tweaking (we owe him both Baghari and Visa for Robert Piguet).

Actually, reformulated doesn’t even begin to cover it: Azzaro Couture is a new fragrance. Vanessa Seward, Loris Azzaro’s last assistant and the keeper of the flame, expressed a wish to modernize the scent while maintaining its spirit, much as she had maintained the style of Azzaro’s 1970s slinky, draped, red-carpet gowns while adapting them to contemporary wear.

Oddly, when I smell the new Azzaro, I get the feeling that it was entirely stripped of its oakmoss backbone. Surprisingly, it isn’t: oakmoss and treemoss are both listed in the ingredients of the new formula.

The old Azzaro has the opulent feel of 1950s fruity chypres like Diorama, but seen through a post-Diorella prism: it was composed in 1975 by Maurice Thiboud, who was Jean Carles’ successor but one at the Roure school of perfumery, three years after the release of Edmond Roudnitska’s last masterpiece for Dior. Thus, like Azzaro’s gowns, it retains the old-school glamour of classic couture (had Gilda been filmed in the 70s, Rita Hayworth would have worn Azzaro in her famous strip scene) while bringing a new, jersey-like suppleness to the fruity chypre.

Like Diorella and its forerunner Diorama, the original Azzaro kicks off with a rich, fruity blend: in this case, of slightly over-ripe mirabelle (a golden, sweet rather than tart, dark-flavored plum) and strawberry, bathed in a blend of oakmoss and patchouli. Gardenia and jasmine dominate its floral heart, though rose, ylang-ylang and orris are also listed notes. It is much less green and gender-bending than the Eau Sauvage-inspired Diorella, but it owes much of its light touch to Roudnitska’s paring-down of the fruity chypre formula.

The new Azzaro Couture, by comparison, sings in a much more strident note: a rose-tinged soprano to the old one’s moss-darkened mezzo, with a crunchy hit of confectionary sugar in its vanilla base and a hint of honey that turns the patchouli syrupy.

The formula has been stripped of its aldehydes for the sake of modernity; their fizziness is replaced by the ubiquitous, nose-tickling pink pepper. It’s been sold as fruitier than its predecessor (or so say the SAs), but it isn’t: in fact, I can’t smell many fruity notes in it. What I do get a lot of is gardenia and muguet (there goes the Big Green White Bubble again). The blurb boasts of “five absolutes, a rarity in contemporary perfumery given the costs involved. These absolutes are mimosa, rose de mai, iris, ambrette seed, and galbanum.” And Azzaro Couture does, indeed, have an opulent texture, somewhat more tightly woven than that of other neo-chypres: it remains firmly ensconced in a slightly retro posture, like the house of Azzaro’s post-Loris gowns.

This reformulation is rather similar to another major tweaking of a very similar fragrance, that of Acqua di Parma’s Profumo by Nathalie Lorson – as though Lorson and Guichard, confronted with the same problem, how to modernize a 1950s-style fruity chypre, had arrived at the same solution. Neither new scent is mind-bogglingly original, and I, for one, prefer both in their original formulas, in all its old-school mustiness. But for a diva-ish, entrance-making fragrance, you could do a lot worse. They’ve taken off the girdle – they can. Underneath, they’re pretty buff, with all the right curves.