Can a perfume feel “outdated”? 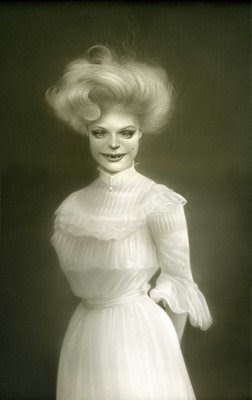 The question arose when I did a post on the new Azzaro Couture, the reformulation of the 1975 Azzaro, in a French blogger’s comment. I had answered, at the time, that this comment deserved a more detailed response. Here it is.

Save for those who have a real culture of perfumery, and can thus link various composition styles to a given period, the perception that a fragrance is “outdated” is necessarily born out of personal experience. The fragrance, or the fragrance style in question, will have been worn by people of an older generation: mother, aunt, grandmother, family friend… So that floral aldehydics like Chanel N°5, powdery florals like L’Air du Temps, orientals like Shalimar, aromatic leather chypres like Miss Dior or fruity chypres like Mitsouko will register, to some people, as “old lady smells” just because those younger people smelled them on old ladies. Would they feel the same way if they had been experienced for the first time in a blind test? Not necessarily.

For decades, cycles of fashion in perfumery were extremely long: over half a century for aldehydics (from N°5 in 1921 to, say, Van Cleef & Arpels First in 1976) or for fruity chypres (from Mitsouko in 1919 to Azzaro in 1975), to name only two of the most enduringly popular fragrance families. It is only when the luxury industry changed, and when, with new business plans in which couture houses were kept alive by cosmetics and accessory licenses, and launches began to be dictated by marketing rather than by the couturier’s wishes, that launches began to multiply at such a pace that the life cycle of each product was dramatically reduced.

And why so many launches? Because “valuations of companies are based on the rate of introduction of new products”, explained industry expert Barbara Hall in a recent IFRA workshop in Brussels, quoted in Perfumer & Flavorist. Which also explains why classics are so often mutilated by botched reformulations: “the more time spent on reformulation the less time spent on new products.” Tweaking an old formula to rebalance it in order to comply with allergy regulations is time-consuming and expensive: often, brands do away entirely with the offending material or substitute some approximation. Which means that older compositions, losing the proportions that made them beautiful and justified their continued existence, languish in the limbo of “old lady perfumes”.

In a world where iPod and mobile phones become obsolescent less than a year after their purchase, where even fashion-forward garments have turned into disposable items, discarded into landfills after less than a season, thanks to chains like Zara and H&M, it isn’t surprising that this frenzy for novelty has contaminated the world of perfumery: as soon as a bottle is empty, it is replaced by a newer product.

In this context of accelerated consumption, classics compositions, with their complex structures unfolding over several hours, are also rejected in favor of juices with pleasing and easily read top notes – vanilla or fruity accords found in shampoos and shower gels.

In this launching frenzy, only blockbusters such as Angel, CKOne or L’Eau d’Issey sell enough over the years to embody an era – and thus run the risk of being perceived as “outdated” by the next generation. But is the idea of a fragrance zeitgeist still relevant, when marketing, rather than the beauty of a composition, leads the game?

The idea that a fragrance can become outdated is only relevant if you consider that fragrance is purely a consumer product (which it is, for the most part) rather than as a work of art… Of course, few new compositions can pretend to that status, even within the niche brands who claim “artistic license” though they are just as market-driven as mainstream brands.

But whether they are classics, niche or mainstream, some fragrances can indeed be judged according to the same set of criteria than works of art. Some people may think that Mitsouko is outmoded because it has been worn for several generations, but no one can argue that Mitsouko is inferior to a neo-fruity chypre like The Different Company Sublime Balkiss (which, by the way, is an excellent fragrance) simply because it is older. Jean-Claude Elléna’s L’Eau d’Hiver for Frédéric Malle is not better than Guerlain Après l’Ondée, which inspired it in spite of their 70 year age difference.

Nothing prevents me from loving both Après l’Ondée and L’Eau d’Hiver, Carnal Flower and Fracas, L’Eau Première and N°5, just as I can love both Goya and the Chapman brothers, Bernini and Jean Nouvel, Fred Astaire and Merce Cunningham, Mozart and Nirvana. Or, to stay in a more futile register: I can wear a 1960s lamé coat over a 2001 Lanvin wool skirt and a Banana Republic merino wool turtleneck bought yesterday, shod in riding boots that haven’t changed much since they were designed in the 19th century, wafting Jean Patou Que Sais-je?, a fabulous fruity chypre launched in 1925 and re-launched in 1984, to a gallery showing work by a contemporary artist who plays on 18th century baroque motifs.

Our image-drenched era is precisely an era in which we can mix periods. Because no style predominates, and fashion tirelessly draws on the past for elements of its vocabulary, the only person who looks outdated is the one who seems stuck in a single era, who never changed her style since she was 20. It is this rigidity, rather than the elements of her look, that seems outdated. I wore Shalimar when I was 16: I don’t see why a girl who is 16 today couldn’t swap her Pink Sugar for Shalimar if she took the time to discover it (which she might, thanks to its new face, the ravishing Natalia Vodianovna).

Whether you think perfume is a timeless work of art (which is the case of most of the classics who have survived to this day and age), or whether you consider that an older composition can be worn in a referential manner (I can love Habanita precisely because it evokes flappers dancing the tango, a cigarillo between their painted lips), the question of perfumes being old-fashioned only seems relevant to me for people who work in marketing.

It is a matter of culture.