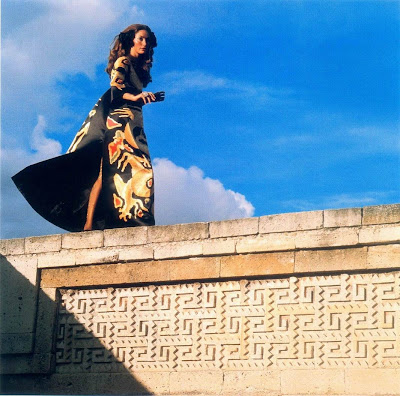 Chypre is traditionally perceived as a formal, don’t-mess-with-me, corseted, cerebral genre, associated to the architectural structures of classic couture. Green, leather or aromatic notes lend it an androgynous allure. Though the fruity chypre family (from Mitsouko on to Femme and Diorama) is somewhat more buxom, its curves are still contained in Marcel Rochas’ “merry widow”.

But by the early 1970s, Mitsouko’s descendants had loosened up a bit, echoing the era’s hedonistic and feminist mores. Led on by the pared-down Diorella (1972), chypres shed their girdle and lightened up on the padding.

Like Cristalle (1974) or Azzaro (1975), L de Lubin, launched in 1974, is a post-Diorella, fourth-generation chypre. But unlike their common template -- Diorella brings to mind summering in Normandy or Provence-- L heads straight for the sundecks of Saint-Tropez, wriggles out of her Yves Saint Laurent safari jacket and wraps on a Pucci sarong.

Touted by the press release as “favoured by pop idols on the disco dance floor”, Lubin’s latest re-edition is loose-limbed, caramel-skinned, quite possibly braless and a little bottom-heavy in her post-hippie, patchouli-vanilla-sandalwood base – but who cares? She’s having such a good time, and her bergamot-splashed, spicy floral jasmine-gardenia-iris-rose heart is so good-natured, you can just let go in her company… The Summer of Love isn’t a far memory yet.

L de Lubin’s reformulation was worked on by the man who composed the original, Lucien Ferrero: I haven’t smelled the vintage, but according to Lubin’s owner Gilles Thévenin, there isn’t much difference – and as he did tell me about modifications to the formulas of Nuit de Longchamp and Gin Fizz, I’m inclined to trust him on this. As a lover of fruity chypres, I am thoroughly enjoying this one: it may not have Diorella’s class or Mitsouko’s mystery (what does?) but its sensuous, easygoing, bordering on the gourmand nature makes its easy to wear and easy to love.