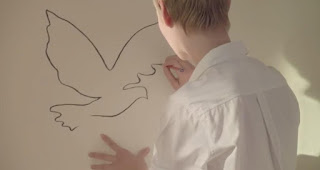 When I met my goddaughter, she was blissed-out, shrimp-pink and all of three hours old. The promises I made her that day, she’ll be the first to know about when the time comes. I haven’t been the best of godmothers, since we lost touch for a few years following her parents’ divorce. The little girl who fell asleep in my lap at the party following her mom’s remarriage has since grown into a 10 year old punk ballerina who is two-thirds legs. And a nose.

When we reconnected yesterday in her father’s apartment, she cried out: “It smells so beautiful here!” I was wearing Séville à l’aube, and told her about it. So she asked me:
“Well, do you know By Kilian?”
“Of course. I’ll bet your favorite by him is Love, right?”
Whereupon we argued on whether it smelled more of meringue or marshmallow. She also loved Back to Black. Then informed me her perfume was L’Air du Temps though she alternated with a Kenzo she couldn’t remember the name of, but the bottle was blue and it smelled blue, and something for little girls by Bulgari.

One of her favorite smells was orange blossom because she loved Oriental pastry even better than chocolate macarons. She found Angel too cloying. She’d fallen in love with a Cacharel perfume mini she’d found in her aunt’s bedroom… Loulou? Loulou, of course. But Amor Amor smelled cheap. She declared that all men’s fragrances had the same fresh out of the shower smell, which she found chemical and hated.

She told me that at school when she was younger, she’d had a perfume class and mixed a fruity blend she’d proudly given her mother. Years later, she realized it was a pretty awful mess.
“Now I know what I’d put in.”

So I promised I’d find a children’s perfume course to take her. But what I’d really love to do is drag her around to all my meetings with perfumers. I have no merit whatsoever, yet I can’t help but feel hugely, irrationally proud of my goddaughter. A couple of days ago, Musette from the Perfume Posse posted about who’d inherit her perfume collection. Of course that’s something I’d be asking myself. No longer. My goddaughter is one-of-us.