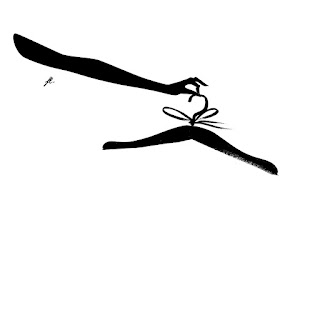 I started out chuckling at La Petite Robe Noire’s macarons Ladurée aesthetics, and griping about the fact that one luxury behemoth, LVMH, had snatched a concept that clearly belonged to another, Chanel: surely the Little Black Dress’s address was 31 rue Cambon rather than 68 avenue des Champs-Élysées.

But as the participants in my London College of Fashion “Understanding Fragrance” courses blind-smelled La Petite Robe Noire for an exercise on accords, and systematically broke into blissful grins, I reconsidered. If I could praise Patricia de Nicolaï’s sugared almond and jasmine accords in Kiss Me Tender or Serge Lutens’s licorice, black cherry and mulled plum Boxeuses, wasn't there a hint of snobbery in not admitting that as far as chic gourmands went, La Petite Robe Noire was top of the basket?

In fact, I’ve always wondered why La Petite Robe Noire was launched on such a restricted scale: the scent conceived by Guerlain’s olfactory development director Sylvaine Delacourte was well within the new house codes, on a par with L’Instant (which Maurice Roucel explicitly acknowledges she co-authored).

Now Guerlain has seen the point, and is launching La Petite Robe Noire, tweaked by Thierry Wasser and putting forward the Guerlinade, as a mainstream product. Quite cleverly, the brand has chosen not to call on a famous face to front it – a cheaper option and one better suited to a “dress” meant to suit every woman. The campaign is authored by Kuntzel & Deygas, the chic duo who designed Spielberg’s Catch me if you can opening title sequence.

La Petite Robe Noire will be presented as of March 3 in Guerlain’s pop-up store on the Champs-Élysées. I haven’t smelled it yet but will report back with a review.