Of Maison Martin Margiela's Untitled and Jeanne Lanvin La Rose: A Rant on Fashion and Perfume 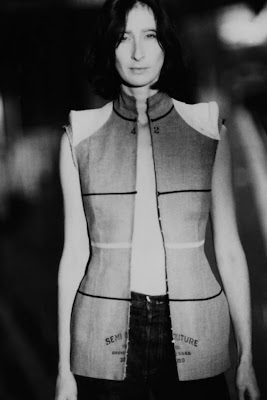 Preparing the presentation of 12 classics of the 20th century for my London College of Fashion students, I was struck by the utter consistency of the message they gave out: the scent, the bottle, the box, echoed the couturier’s style. Chanel N°5 even managed to predict the direction Gabrielle Chanel was to take (the Little Black Dress was still 4 years off when it was conceived), and though Yves Saint Laurent’s Opium may mark the end of an era with a Chinese-themed couture collection conceived, possibly for the first time, to back up a perfume launch, it was still very much the couturier’s brainchild.

The house of Chanel probably survived the fallow late 60s and 70s, and up to Karl Lagerfeld's arrival, thanks to N°5; and clearly, fragrances (along with cosmetics and accessories), are what sustain fashion houses financially. John Galliano’s Dior couture extravaganzas are there to push bags, sunglasses, lipsticks and bottles of Miss Dior Chérie. Thierry Mugler’s best-sellers are all that remain of the house that made the front pages in the 80s and 90s.

Some brands do show great consistency between scents and runway. Narciso Rodriguez’s fragrance line echoes the sleek, urban, no nonsense feel of his designs. Prada’s is a great olfactory translation of Miuccia’s “too brainy and chic to go for man-pleasing ploys” sartorial codes. Kenzo’s perfumes reflect the joyous, multi-ethnic riot of colors and prints Kenzo Takada unleashed on the fashion world in the 70s.

But Lanvin… Lanvin’s fragrances just make me cringe. Granted, the house went from hand to hand and managed to let go the fabulous fragrance name Scandale (now owned by Roja Dove). Hiring Alber Elbaz when Tom Ford ousted him from Yves Saint Laurent was a brilliant move. Elbaz’s designs have a grace, a dignity, an easy femininity that says “woman with a real life” without forsaking edginess and chic. I own a few of his pieces (as well as some of his YSL stuff) and they just seem to sail through the years timelessly.

Clearly, Alber can’t have had any input in Rumeur, Jeanne Lanvin or its new flanker Jeanne Lanvin La Rose, a fruity floral that smells like a teenager gargled on Yves Saint Laurent Baby Doll, swallowed some, had a piddle and bottled the result, a pallid, pointless little thing…

Maison Martin Margiela’s Untitled is a somewhat better fragrance. But, as Octavian Coifan pointed out in his review, it smells like the Prada that never was – unsurprisingly since its author, Daniela Roche-Andrier, has signed the entire Prada fragrance line. Its green/smoky accords – with a roasted note that brings to mind Hermès Vétiver Tonka at times and a reminiscence of Chanel Sycomore – are infused with that trademark Prada soapiness. Not bad, though a little thin and with a sour note that pops up. But not Margiela.

My sources say that Martin Margiela himself was personally involved in the project. In fact, this was his last involvement in the house he founded and has now left. The very name of the fragrance, Untitled, is consistent with his anonymous labels – off-white pieces of ribbon sewn inside his garments, though those in the know could always tell a Margiela piece by the four off-white stitches that showed up at the back of the neck. The choice of a plain lab bottle matches his sales assistants’ lab coats.

But, hey. Untitled is the name of about seventy million artworks. And plain lab bottles? Hasn’t that been done ever since Coco Chanel pretended she’d picked them for N°5 (even though it was actually a design by the glassmaker Julien Viard, whose milliner wife had worked with Chanel)?

After all, we’re talking about a man who bathed garments in bacteria cultures and exhibited the moldy results in the garden of a museum; a designer who questioned the very nature and shape of clothing, recycled used garments, exhibited the construction of clothing as a work in progress, veiled the features of his runway models. He questioned designer celebrity by never being photographed, never giving face-to-face interviews and always speaking in the name of the collective he’d created. Martin Margiela was, in a word, as close to a conceptual artist as you’ll ever get in the world of fashion, though most of his pieces are eminently wearable…

Untitled reflects none of that edginess, a fact that can be put down to the brand’s new owners, Diesel, and the company that holds the license, L’Oréal. Even its green note is more on-trend than groundbreaking. They should have gotten Christophe Laudamiel. But then, they might have come up with something disconcerting. And disconcerting doesn’t make money, does it?

Untitled is, for the time being, exclusive to Colette in Paris. It will be launched world-wide in March.