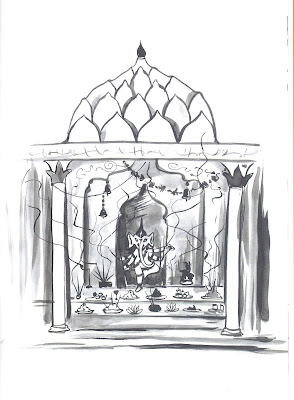 It was bound to happen. One the one hand, for the past decade, mainstream fragrances have been veering towards the notes of functional perfumery, while perfumed candles and house sprays have been getting better and better. On the other hand, perfumers have been seeking new inspiration by capturing the olfactory imprint of places rather than working on perfume as an extension of female or male personae – Hermès’s Jardins series or L’Artisan Parfumeur’s Voyages collection being cases in point.

I’ve been thinking a lot this past year that home fragrances are the last unsaturated market in perfumery: perhaps not the final frontier, but definitely an under-exploited field. Clearly, Frédéric Malle has been thinking along the same lines, and he has acted upon his idea, by commissioning some of the finest perfumers in the business – Dominique Ropion, Carlos Benaïm and Sophia Grosjman – to compose home fragrances that meet the same exacting standards as those they apply for “skin-wear”.

It isn’t an entirely novel venture: Annick Goutal, Iunx, By Kilian or L’Artisan all offer candles (and in the case of L’Artisan, room sprays) that are either adaptations of their fragrance lines or “stand-alones”, composed by the same perfumers.

But Frédéric Malle has taken the process one step further by conceptualizing it and thus, by asking his perfumers to think about the possibilities opened by divorcing fine fragrance from skin. The structure and development could be different; they could forego the “skin-loving notes” of personal fragrances.

And this is where it gets interesting. Malle asked his dream-team to base itself on the type of formula that practically never makes it to perfumery shelves: olfactory sketches and “captures” of the smell of specific places or flowers by IFF’s “Living Flowers Technology” developed by the late Dr. Braja Mookherjee…

Frédéric Malle then took another step into new territories, by developing, alongside the traditional candles, a novel way of diffusing the scent. Thinking that a hot flame was a strange way of sending out the fresh smell of gardenia, muguet, rose, magnolia or lily in the air, he sought to replicate the way flowers puff out their scent all day long, without the top/head/base notes of skin perfumery. The result is a red box called the “Fleur Mécanique”, a one-channel, totally silent smell radio: press on the button once, and it sends out two hours of, say, “the gardenia song”. Press it twice, and you get a three-hour show. The fragrance itself is in a bottle inserted inside the gizmo.

Mr. Malle also developed what he calls “Rubber Incense”: small rubber mats impregnated with Saint des Saints, developed by Carlos Benaïm from Dr. Mookherjee’s “Living Flower” capture of the air in Indian temples. The pads can be slipped in drawers, closets or cars. No one has reported using them for mouse-pads yet, but it’s certainly tempting. The scent itself, Saint des saints, is quite impossible to pin down – a sandalwood-and-incense-bathed air saturated with the auras of centuries of faithful… It is also offered as a candle, as are Benaïm’s Coffee Society, a capture of “the ephemeral odor of a living room a few minutes after the end of a Parisian dinner, when the guests have just left”, an Sophia Grojsman’s Russian Nights, a nutmeg, cinnamon, iris and sandalwood blend, and

Five scents are offered both in the Fleurs Mécaniques and candle medium: Carlos Benaïm’s Rosa Rugosa, a dry, fresh rose to combine with Edouard Fléchier darker, winey Une rose; his Rubrum Lily, which can be played off Lys Méditerranée in a ying-yang duet of hot-dry-spicy and green-fresh-watery; and his Jurassic Flower, the olfactory portrait of magnolia. Dominique Ropion’s 1er Mai, a realistic rendition of lily-of-the-valley based on historical muguet formulas and headspace technology; and his Un Gardénia, la nuit, a “living flower” capture. Ropion’s Santal Cardamome, an accord the perfumer found while working with Malle on the reconstitution of the smell of Mysore sandalwood (the trees are now protected and their essence is no longer available to perfumers), is offered only in the candle.

Now, you say, is this all any good? And that’s where I’m stumped. I love the realistic, creamy rendition of gardenia especially and found Saint des Saints very intriguing indeed. But the collection’s very high price point means I only smelled it in the shop: at 105 euros, the gardenia candle is the most expensive (the others are priced from 60 to 90 euros). The Fleur Mécanique is a Visa-busting 260 euros, CORRECTION: including the scent (refills between 50 and 70 euros). The Rubber Incense mat costs 75 euros. So that however much I think the concept is excellent and the compositions lovely… I’ll have to take a pass.

Now on to you: Which atmosphere would you like to capture with the "Living Flowers" technology?