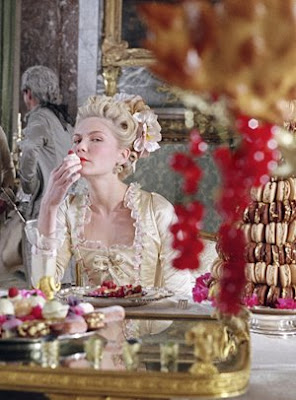 What in God’s green earth (well, snowy in Paris for the moment) possessed Guerlain to name their new fragrance La Petite Robe Noire, aka « the Little Black Dress »? As every blogger and her sister has remarked by now, the item is kind of a Chanel trademark; and the scent itself, as Octavian Coifan says, is anything but black, unless the black refers to the defunct Black Cherry Vanilla Coke.

Guerlain’s scents were always too narrative to lend themselves to the abstract, stylized, go-with-everythingness of the LBD. And despite the lovely array of black dresses lent by star vintage dealer Didier Ludot’s Petite Robe Noire boutique in the Palais-Royal (both vintage and reproductions), the new Guerlain isn’t so much a garment as a bit of pastry – definitely closer in spirit to Sofia Coppola’s gourmande Marie-Antoinette than to Blake Edward’s Holly Golightly.

Of course, pastry perfume is one of the things Guerlain has been doing the most recently: Aurélien Guichard’s Elixirs Charnels have that edible, dusted sugar quality; Maurice Roucel’s L’Instant and Insolence, Thierry Wasser’s Quand vient la pluie and Iris Ganache, not to mention Jean-Paul Guerlain’s Spiritueuse Double Vanille, could all easily be translated into dessert (with Guerlain Homme’s mojito, we already have the pre-dinner cocktail).

La Petite Robe Noire is a macaron from across the street, chez Ladurée. It starts out on a tart mouth-watering red fruit Kool-Aid note before gaining in complexity with a rose-violet-raspberry jam sandwiched between darker, chewier vanilla-licorice-almond layers. Once that’s said, there’s nothing much to add. It’s actually pretty well balanced – the way it hangs together is Guerlain – and joyful, much in the way of Insolence Eau de Parfum. But does it deserve a separate launch, with a different style of bottle – what is it with this metastatic proliferation – when, as Octavian says, it’s more flanker-ish than anything else, a “Macaron Insolent”, as it were?

Though the SAs at the flagship store said they weren’t given the perfumer’s name, a few sources, most notably the Fashion Daily Style Newsletter, attribute it to Guerlain’s creative director Sylvaine Delacourte with young Drom Fragrances perfumer Delphine Jelk (who authored Bill Blass Couture numbers 7 and 8). What the hell has happened to Thierry Wasser after his well-publicized nomination as Guerlain’s in-house perfumer? A subject on which Helg of the The Perfume Shrine speculates after noting that neither of the two upcoming Guerlain fragrances, Eau de Shalimar Flower and Mitsouko Fleur de Lotus, are credited to him.

On another note, the tester for the über-expensive reedition of the 1914 Champs Elysée came out of the closet for me. Holy cat tush! Iris drenched in civet that gives off a distinct whiff of decay. I can’t quite imagine the collectors who forked out the 10 000 euros for the Baccarat turtle bottle ever wearing this. It doesn’t feel much like the vintage Champs Elysée Octavian made me smell -- that was much more aromatic, with tarragon, violet and violet leaf, rose, carnation, oakmoss and coumarin. And not an animalic whiff. Granted, formulas change over the years, but this is more like a feral sister to Jicky. The one that was kept in a cage in the basement.