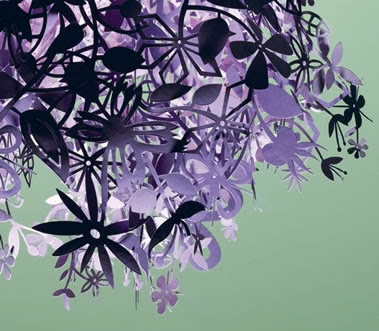 I’ve only sniffed this on a scent strip – no skin tests allowed! But again, I couldn't resist offering this preview of the eagerly-expected new offering of Frédéric Malle Éditions de Parfum...
Knowing that this was a violet fragrance by Maurice Roucel, you’d wonder whether this might be an edgier rewriting of the red-fruit-laden Guerlain Insolence.
Not.
You’d think of the perfumer’s hypercaloric compositions, from Rochas Tocade to the salty vanilla-immortelle dessert that is Lolita Lempicka L, or the best-selling Frédéric Malle Musc Ravageur, which passes for a sizzler, when it mostly makes you want to lick (or get licked on) the parts where you applied it…
And you’d be wrong.
Because you'd be forgetting that Maurice Roucel, with his bon vivant moustaches and his big comforting paws (fantasizing here), is also the author of one of the most austere, haughty, melancholy scents on the market, Serge Lutens Iris Silver Mist.

Dans tes Bras (“In your Arms”), whose name hints at intimate embraces, straddles the line between an invitation to caress and a whispered secret. Violet fragrances have had a mawkish reputation ever since the late 19th century – the violet itself is a symbol of shrinking, unspoken love -- when cheap ionones reproduced its smell were first synthesized, and cheap eaux de toilette inundated the market. Pushed into the woods by Roucel, it sheds its face-powdered innocence.

Of course, ionones already have a woody facet which calls for the accord, and the said accord has already been brilliantly executed by Serge Lutens in Féminité du Bois and Bois de Violette. But while the Lutens veer towards the oriental by setting off the violet with cedar and candied fruit, Dans tes Bras drags the shrinking blossom back into the undergrowth.

After a powerful blast of green violets boosted by bergamot – the greenness is probably produced by the salicylate cocktail quoted in the notes by Osmoz, methyl salicylate being what give tuberose its minty smell – the fragrance quickly evolves, even on cardboard, in the summer heat.

A puff of smoke (incense) weaves in an out, before a wet earth smell pulls the violet towards an iris-like note – there is no iris, but there is an iris imprint, as my sniffing companion said.

This wet earth smell announces the patchouli: its bitter smell dries up the sweetness of the violet. There is clove, but not much, at least on paper: along with the heliotrope and a white, slightly metallic musk, it produces a powdery effect (which is probably emphasized by another salicylate, benzyl salicylate, with its carnation facet).

The woody base of sandalwood and cashmeran (a molecule often used in masculine fragrances) binds the notes into a creamy blend. The composition is so well balanced that it’s hard to dissect it: the overall effect is smooth and suede-like.

Dans tes Bras is beautiful on paper. I am eagerly waiting for a skin test, especially since Maurice Roucel and Frédéric Malle have stated that they wanted to recreate the intimate smell of warm skin, as an introverted complement to their sensual best-seller Musc Ravageur.

Dans tes Bras will be available in September in the three Parisian Frédéric Malle shops, and a bit later on the international market.