The Fragrant Realm of Duende (I) : The Song of Jasmine 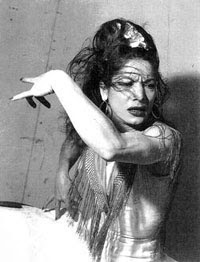 Jasmine scares me. Jasmine is too beautiful. Jasmine makes me cry, when I walk past a bush spilling white stars over the wall of an enclosed garden, maybe because it smells like the lost South of my Marrano ancestor when he fled the Spanish Inquisition, after the fall of sweet, learned and meditative Cordoba. Did he have the time to save a sprig to bring along?

Jasmine haunts me, it makes me weep for the beauty of the Andalucian nights, beauty yielded and withdrawn in the same gesture: these tears to beauty are the very essence of what the Andalucians call duende, sung by the poet Federico Garcia Lorca. An intense beauty teetering on the edge of its own extinction, which draws us, tears us apart and leaves us panting…

“All the arts are capable of duende, but it naturally achieves its widest play in the fields of music, dance and the spoken poem, since those require a living presence to interpret them, because they are forms which grow and decline perpetually and raise their contours on the precise present.”

Couldn’t this idea of duende apply to perfume, an art born by the body, always on the brink of physical disappearance, leaving only an imprint, fleeting on the flesh, endless in memory?
Aren’t flowers the very embodiment of duende when they touch the soul in all the brevity of their flamboyant existence, sending out the last of their fragrance in moist hair and between the breasts where they were planted?

“Once the Andalusian singer, Pastora Pavon, "The Girl with the Combs," (…) was singing in a little tavern in Cádiz. She sparred with her voice - now shadowy, now like molten tin, now covered with moss; she tangled her voice in her long hair or drenched it in sherry or lost it in the darkest and furthermost bramble bushes. But nothing happened - useless, all of it! The hearers remained silent. (…)

Then the "Girl with the Combs" got up like a woman possessed, her face blasted like a medieval weeper, tossed off a great glass of Cazalla at a single draught, like a potion of fire, and settled down to singing - without a voice, without breath, without nuance, throat aflame - but with duende ! She had contrived to annihilate all that was nonessential in song and make way for an angry and incandescent Duende, friend of sand-laden winds (…)

The "Girl with the Combs" had to mangle her voice (…) She had to deny her faculties and her security; that is to say, to turn out her Muse and keep vulnerable, so that her Duende might come and vouchsafe the hand-to-hand struggle. And then how she sang! Her voice feinted no longer; it jetted up like blood…”

I know some perfumes with duende. They sing with the voluptuously raspy voice of jasmine and orange blossom.

Excerpts from "The Duende: Theory and Divertissement" by Federico Garcia Lorca (1930), provided by Music Psyche