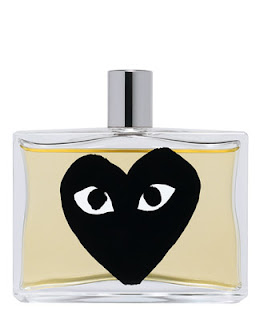 From L’Heure Bleue to Vent Vert and Habit Rouge to Bulgari Black – the latter being the colour of preference: at 40 Noir/Blacks, I stopped counting – the fragrance industry has always borrowed from the chromatic wheel to name its products, usually through adjectives. Now trending: serving up the colours plain. Lacoste Rouge, Vert and Bleu earlier this year, Puma Green and Yellow in June and in between, the new Comme des Garçons Play trio, Red, Green and Black.

The operation was a quickie, says CdG Parfums artistic director Christian Astuguevieille, with developments wrapped up in two months, the idea being to keep the scents as simple and approachable as the Japanese brand’s “absence of concept is creation” Play line of tee-shirts, polo shirts and sweaters.
Unlike Comme des Garçon’s Red and Green series (Incense could stand in for Black), the new trio isn’t figurative, but what’s striking is that most of the notes used in each scent stick to the same colour as the name, a pretty playful idea in itself, though the perfumer Antoine Maisondieu said he hadn’t done so deliberately.

Play Red is built around a cherry accord – and if anyone could make a cherry edgy, it’s Comme des Garçons. The trick, Maisondieu explains, was to veer off the classic, almondy-sweet combination (heliotropine, benzaldehyde, adding ethyl maltol for black cherry) by using a special quality of Tolu balsam with a cherry facet, along with cinnamon in which he also perceives a cherry effect. Red mandarin (i.e. the oil extracted when the fruit is ripest) adds juiciness along with fresh/caramelized contrast of aldehydes and cumin; Safraleine – yet another tone of red – gives a leathery edge to the blend, along with slightly rosy facets.
The result is a tart, non-gourmand cherry with burning cinnamon-candy undertones, as good-natured and cheerful as its namesake colour: my favourite of the trio.
Notes: Red mandarin, pink peppercorn, Safraleine, red cherry accord, geranium, cinnamon, osmanthus, myrrh, tolu balsam.

Play Green takes off with a huge, nose-cooling gale of mint, the intensely sweet “nanah” variety used in Moroccan mint tea, which according to Maisondieu has a slight absinth facet. Though the mint dominates throughout, lime and juniper add fizz, basil and lentisque a slap of sap, while vetiver roots the leafy bouquet.
Notes: Nanah mint, lime, juniper berry, basil, jasmine, mastic, ambrette, vetiver, cedar.

Play Black is the most masculine and offbeat of the bunch, a sooty-hued scent with a salty flavor that somehow conjures algae, another tone of black to match the powerful Madagascar pepper oil, layering over the matte metallic diesel tones of oxides and sticky-smoky birch tar oil. Incense picks up the pepper in the base notes. Lavender isn’t listed, but matched with the tree moss, give Play Black a fougère-like vibe.
Notes: Black pepper, pepperwood, red pepper, violet, thyme, black tea, birch tar, incense, tree moss.

Comme des Garçons Play Red, Black and Green are available in an “accordion-box” three-scent set as well as separately, adorned with the impossibly kawaii heart logo designed by Filip Pagowski. 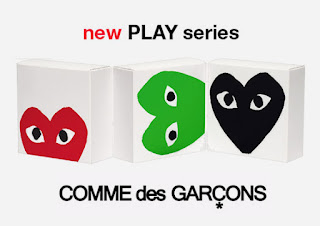 I’ll be drawing a set of 2ml decants of Play Red, Green and Black. Just drop a comment saying which fragrance you know/own is, to your nose, the reddest, greenest and/or blackest.
Posted by carmencanada /Grain de Musc at 13:34