Karl Lagerfeld Kapsule (and a draw of Kollector minis) 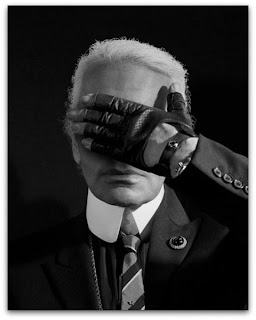 Sorry for giving you the silent treatment, boys and girls. Last week was Paris Fashion Week and I was asked to cover some of the shows by la-couture.com, a Paris-based webzine with a taste for the more directional young designers (read: Belgian, Japanese and a smattering of Asians). What with my usual grueling work schedule, this barely left time for basic bodily functions, let alone blogging.

However, I did bring back a goody bag from Karl Lagerfeld’s show (for his own eponymous label, not Chanel): three whopping 5 ml minis of his new fragrance trio Kapsule, to be launched in the coming days.

In the same way Karl likes to inject his own sartorial choices in his collections – stiff-collared white shirts, stiff black patent-leather waist-cinchers, stiff hand and arm metallic lace jewelry by Erik Halley -- Kapsule goes in for a bit of gender-bending. All three fragrances are meant to be worn by men and women, despite the floral notes of two of them. And all three may be layered at will, which makes for seven different fragrances in all, for the price of three.

The idea of a set for layering is not exactly new: Claude Montana launched his Eau d’or, Eau d’Argent and Eau cuivrée way back in 1994 as a set called Suggestion. The concept poses a number of problems: each fragrance has to stand on its own while combining smoothly with either or both of the two others. The problem, here, is compounded by the fact that Coty called on three different perfumers: Mark Buxton for Light and Emilie Coppermann for Floriental, both from Symrise, and Olivier Cresp from Firmenich for Woody. Buxton (he of Comme des Garçons fame) and Coppermann (Eau de Lalique, Brit Pure) worked together on Paco Rabanne Black XS for Her. Oliver Cresp has authored, among other fragrances, the mega-hits Angel and Light Blue, as well as the original Black XS. A pretty good line-up, all told.

The bottles, colored glass squares with the cap on one of the corners, have been revealed by Octavian of 1000fragrances to have been lifted straight for a long-defunct brand of the 20s, Ybry, for a 1925 perfume called Mon Âme. Lagerfeld, an erudite of things Art Deco, which he used to collect, is surely aware of this, but he’s not saying: they’re meant, he explains, to recall the shape of books (which he still collects).

Not much is said about the K.’s input on the actual fragrances, although he has lent himself with his usual gusto and wit to the promotional grind, revealing that he usual wears Acqua di Parma’s Iris Nobile or a combination of Shalimar and an unspecified Comme des Garçons. No stranger to perfumery, Lagerfeld wore Rochas Moustache (by Thérèse Roudnitska) as well as Jacques Fath’s Iris Gris and Green Water (both by Vincent Roubert) as a young man. He launched his first fragrance, the masculine Classic in 1978 (he says he stopped wearing it when he started to smell it on everyone). KL (1982), Photo (1990), Sun Moon Stars (1994), Jako (1997), Lagerfeld Femme (1990), Lagerfeld Homme (2002) followed, none of which I’ve smelled, unfortunately, making it hard for me to tell whether there is an actual Lagerfeld olfactory style.

So what about the fragrances themselves?

Though I greatly admire Lagerfeld’s cut-and-paste genius, his wit and his persona (he calls it his "puppet"), I wasn’t expecting an awful lot, given that the scents are made by Coty (Sarah Jessica Parker’s are nice, but let’s say they didn’t make the earth move for me).

Mark Buxton’s Light, Karl Lagerfeld’s avowed favorite of the three, sounds like it might be a cologne-ish thing, but isn’t: it’s a jasmine spiced-up with nutmeg and clove, as well as a dash of bitter orange, but not in a pomander-ish way. The general feel is of a watered-down, slightly butched-up Jasmin de Nuit , with a muguet type of green floral note in the middle which brings to mind the one in Chanel Beige (though that’s where the resemblance stops). The more I wear it, the more it pleases me: I keep looking around to see where that lovely, moist floral scent is coming from... Left wrist.

Emilie Coppermann’s Floriental starts with a bit of nose-tingling greenery which could be the listed ivy leaf: the green opens up the space in which the violet and black tea, also listed, get to mingle. Neither is particularly strong (the black tea in particular doesn’t give off any smokiness – this is no Bulgari Black). I could swear there’s amber in the base notes (makes sense for an oriental), but this definitely sticks to the unisex brief.

Olivier Cresp’s Woody lists plum and cedar (shades of Féminité du Bois), and there’s something a little smoky-sweet that smells like benzoin. It starts off with some tartness and comes off pretty sweet right off the bat. The cedar, possibly of the Virginia, pencil-shaving (and slightly headache-inducing to me) variety, pops up in a matter of minutes.

These all need quite a bit of spritzing to give off any sillage, what with the edt concentration: they’re fairly simple but with some evolution. So far, I’m with Karl on Light as my favorite of the bunch, but I haven’t tried layering yet: stay tuned for further experiments. Meanwhile, the scent that's wafting up from the three scent strips is pretty nice, which bodes well.

In the meantime, let’s have a little draw: drop a comment, and if picked out of the hat (I’ll get my psycho Siamese girl Jicky to pounce on the paper slips and make the choice), you will receive a trio of Karl Lagerfeld Kapsule minis, straight from the Paris Katwalk.