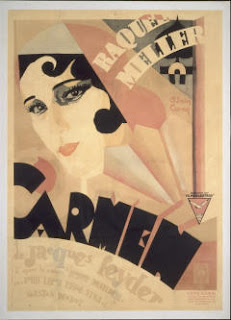 Which flower does Carmen throw to Don José, the hapless officer whom she bewitches, drags into the sierra to become a smuggler, throws over for a bullfighter, and turns into a murderer when she would rather die free than go back to him? It is neither a Gypsy rose nor an Andalusian carnation. Carmen has planted a bunch of cassie flowers between her breasts; she holds a sprig in her mouth. Beware the tiny, unassuming golden blossom: it is far from innocent.

There is something of the sternness of the original Carmen – that of Mérimée’s short story – in Dominique Ropion’s composition for Frédéric Malle. Under the promise of sun between spring clouds – the acacia farnesiana has an early blossom – there are puddles and mud. This isn’t clean spring: its freshness is deceptive, as is its warmth. Cassie, the star ingredient, smells of many things: wet cardboard – a trait it shares with iris --, balsamic wood, cinnamon and bitter almonds. Paired with mimosa and the sweet metallic sheen of violet, it gives off something leathery; indolic jasmine draws out the animal in it, just like Carmen made José forsake mother, fiancée and rank with her wiles. A slash of cumin dirties it up even further with its hints of human rankness. Yet throughout it remains fresh as spring, with a heliotropin-like powdery sweetness, which makes it all the more deceptive. In her beautiful review, Marina from Perfume-smellin’ Things calls it unchaste, and that it is, under the wonderfully complex and smoothly classic composition which holds it together: this femme fatale doesn’t feel the need to show cleavage. The whiff you get when she moves her skirts – has she been rolling around in the earth? – is enough to leave you wondering. It could be as innocent -- on some skins, it is – as a woman who would choose freedom over lies.

(Dedicated to K., who chose to buy it Saturday, and who kept sending me whiffs every time she moved; and to Cait, who wove its fragrance into a magical tale in Legerdenez.)