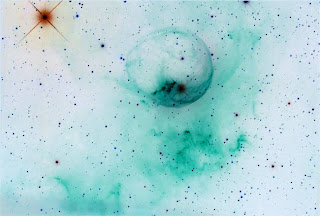 Today, Octavian from 1000fragrances brought over the scented card from the latest issue of Bloom, a horticultural magazine, edited by trend-hunter supreme Li Edelkoort.

Merveille was composed by an unnamed perfumer from the Givaudan labs. It’s a lovely abstract scent, that manages to be just about everything in the book (floral, fruity, aquatic, mineral, grassy), and gives off an impression of space and freshness.

After talking around it for quite a while, and sniffing it repeatedly from the card, I thought I recognized it. Not that it exists in nature – it doesn’t. Nor that there’s a fragrance just like it – there isn’t. But Merveille is actually what I’ve been calling, in my mind, the Big White Green Bubble.

I’ve been finding the Big White Green Bubble a lot in fragrances lately. I see it as the answer to a structural problem in perfumery: how to create space between notes, to give them time to meet on their own terms without crushing each other; to give them some breathing space.

Aldehydes once performed a similar function: they churned up notes that could otherwise be perceived as flat and oily. The green floral notes sitting in the heart of a fragrance -- muguet and hyacinth, for instance – have also traditionally been called on to act as mediators between the top and base notes (think vintage Miss Dior). Calone and its marine-ozonic relatives put in a lot of mileage too: they now seem to trite to be used in a straight-faced way (though Bertrand Duchaufour’s new Fleur de Liane for L’Artisan Parfumeur tries to breathe new life to the aquatic genre).

Lately I’ve been spotting the BWGB in lots of fragrances. The new Chanel Exclusive Beige has it, N°5 Eau Première shows a hint of it, which led me back to spotting it in Allure and Coco Mademoiselle. I can make it out in The Different Company’s neo-chypre Sublime Balkiss (though that may be cassis bud performing the same service). It's sitting smack in the middle of Karl Lagerfeld's Light and Floriental. Annie Buzantian’s super-expensive Pure Distance 1 (reviewed by Octavian and Patty of the Posse) is almost nothing but BWGB beefed up with white florals and mimosa. But any browse down the aisle at Sephora’s with a bunch of blotters will turn up a dozen examples: like Edgar Allan Poe’s Purloined Letter, it’s so obviously sitting there it’s practically invisible.

Bloom’s Merveille is the BWGB in its almost unadulterated form; the Platonic ideal of space in perfume. In heaven, this is what air freshener would smell like, if air freshener were needed after a lot of seraphic wing-flapping. It could’ve been called Breathe.

Image: NGC 7635, the Bubble Nebula, from the NASA website.