Guerlain Sous le Vent and the Angel of History: a Storm blowing from Paradise 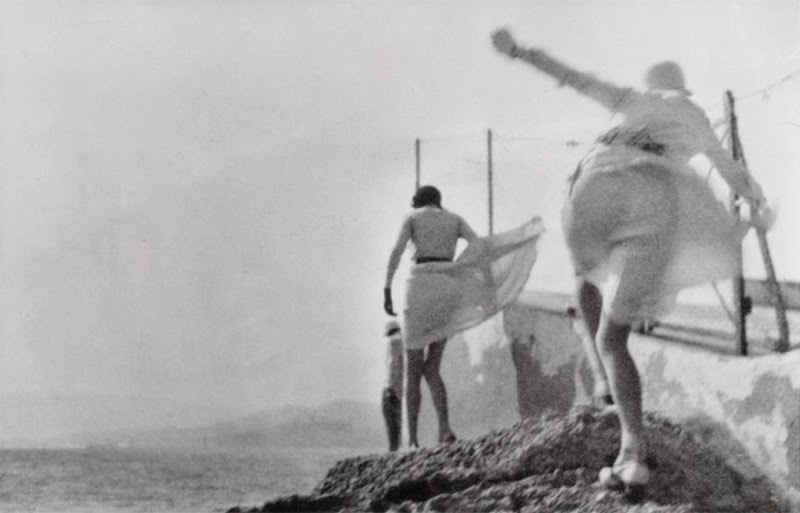 If you are at all familiar with France, you’ll know the country virtually shuts down in August. In the weeks leading up to it, there is a mad rush to get everything ready for September, after which we all collapse in a heap. Apologies for the long silence: it was just not physically possible to blog throughout the ordeal.

Before I can get back to reviewing new releases, here is the English translation of a post commissioned by my friends at the French website Auparfum.com about Guerlain Sous le Vent (1934). It is part of a series about the session organized by Thierry Wasser and his assistant Frédéric Sacone around two dozen historic Guerlain fragrances ranging from Pau Rosa (1877) to Atuana (1952). These were reconstituted based on Aimé and Jacques Guerlain’s original formulas, using “period” ingredients, some of which were especially ordered (such as “uncut” bergamot), others produced in-house. You can smell them on the first floor of Guerlain’s flagship store on the Champs-Élysées (you’ll need to ask a sales assistant to dig them out). 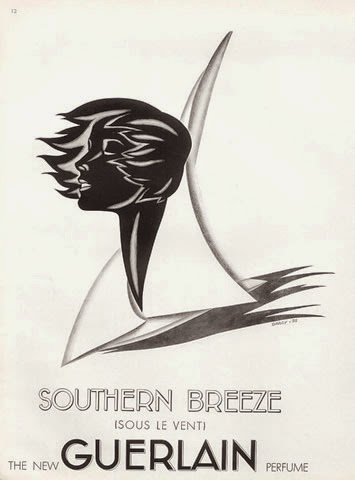 Sous le Vent is said  to be a tribute to the Leeward Islands in the Caribbean, inspired by Josephine Baker (who, being born in Saint Louis, never set foot there). But the wind blowing over those islands must have made a detour through the hills of Cabris during rose harvest season – you could catch a whiff of it at the windows of the Hôtel de l’Horizon, a few minutes away from Edmond Roudnitska’s estate… Thyme, rosemary, tarragon, lavandin, myrtle, acacia (for the almondy touch)? On the morning of May 15th, Cabris smelled of Jicky. You might think I’m getting my blotters mixed up. Let’s just say that the road from blotter to nose, in this historic sniffing session, was just about as rococo as the flight of Guerlain’s iconic bee.

The thread running through the Guerlain classics can in no way be restricted to the fabled Guerlinade. Smelling them with uncut bergamot or nitro-musks already gives an idea of the way those now-restricted materials added fullness and balance to the originals (Jicky’s civet, for instance, loses its “cat crapping in a lavender patch” skank). Spices such as pimiento, clove or cinnamon, whose use is now also restricted by regulations, are also unexpectedly fierce: when you experience Mitsouko in its reconstituted, original version (but also in Thierry Wasser’s currently sold restoration), you realize it isn’t the velvet-cheeked, zaftig Renoir model we’d come to know, but a smoldering 1919 vamp.

Though those spices don’t feature in the olfactory pyramid supplied by Frédéric Sacone for Sous le Vent, they add a burning blast of sirocco to the trade winds that purportedly inspired the scent… It is this searing breeze that lays bare the vertical structure shared by Vol de Nuit and Sous le Vent (which came out within a year of each other), sandblasting off the jonquil powderiness of the former to expose their common earthy green galbanum and moss axis.

We are now flying over a territory initially mapped out by Coty’s Chypre; veering slightly off-course, we’d end up in the Cologne zone (Sous le Vent would in fact go on to inspire Jean-Paul G.’s Eau de Guerlain). But just now, we're taking a nosedive into Guerlain’s kitchen garden. At the heart of the herbes de Provence blend that was already simmering in Jicky, Sous le Vent’s anisic bouquet – verbena, tarragon – conjures a hint of basil… Which is why we'll be making an unscheduled stop in Edmond Roudnitska’s stronghold above the hills of Cabris: Sous le Vent could be a forerunner to Eau Sauvage.

When he started streamlining his formulas with Diorissimo, Roudnitska stated he wanted to strip away the foody notes that were added by perfumers to tame the harshness of synthetics, at least according to him. Was he thinking of Guerlain’s signature vanilla and tonka? The maestro, who seldom mentioned his contemporaries in his writings, never said. But Sous le Vent demonstrates that Jacques Guerlain was apt to wander out of the boudoir gourmand where he conceived Shalimar. Dry, sharp-featured and concise, this aromatic chypre prefigures the neo-Cologne of the Sixties.

And now for a cultural interlude… 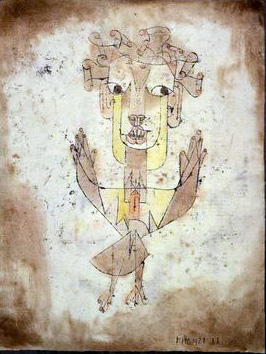 “A Klee drawing named ‘Angelus Novus’ shows an angel looking as though he is about to move away from something he is fixedly contemplating”, Walter Benjamin writes in his Ninth Thesis on the Philosophy of History. “His eyes are staring, his mouth is open, his wings are spread.  This is how one pictures the angel of history.  His face is turned toward the past.  Where we perceive a chain of events, he sees one single catastrophe that keeps piling ruin upon ruin and hurls it in front of his feet.  The angel would like to stay, awaken the dead, and make whole what has been smashed.  But a storm is blowing from Paradise; it has got caught in his wings with such violence that the angel can no longer close them.  The storm irresistibly propels him into the future to which his back is turned, while the pile of debris before him grows skyward. This storm is what we call progress.”

If I’ve quoted Benjamin at such length, it is because he comes to mind every time a press release touts the “timelessness” of a fragrance. A few weeks ago, as Francis Kurkdjian presented his two next launches, a “specialist of contemporary art” was called in to venture a few thoughts in that direction, quoting the Mona Lisa and Picasso’s “Les Demoiselles d’Avignon” (which came off as heavy artillery to speak of a floral and a fougère deliberately riffing on the most conventional styles).

Swept away along with most of the 400 fragrances composed by Jacques Guerlain (only 11 are now available), and then once more when its 2005 re-edition was blown off the shelves by Guerlain’s barrage of mini-collections, Sous le Vent does indeed belong to the numberless “ruins” of perfume history – to the “dead” convoked by the Guerlain session, which was also a spiritualist séance of sorts…

It isn’t so much timeless as it is untimely – the French intempestif, by conjuring “tempest”, is more in keeping with the eolian vocabulary of the Angel of History, propelled “into the future to which his back is turned”. It is because each moment of the past must be re-read at each moment of the present, because underground filiations can be traced, because the official history of perfumery can be bypassed, that smelling Sous le Vent after Eau Sauvage makes Sous le Vent intelligible today.