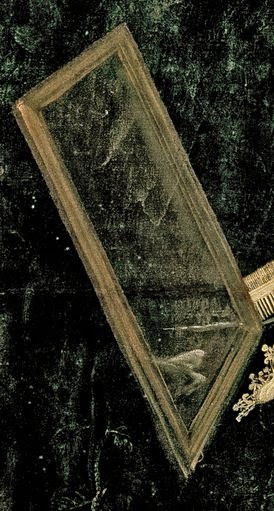 “Why does everything I do turn byzantine?” Chanel asked…

It is this bent for Byzantium, as reflected in the Venetian mirror, which supplied the concept for Coco Noir (just as the orientalist décor of her rue Cambon apartment inspired Coco).

The 2012 eau de parfum, though loaded with enough patchouli to earn its “noir” label, conjured a LBD rather than the brocades of a dogaressa. The new extrait de parfum, however, might prove much more compelling to fragrance aficionados.

Coco Noir Parfum pries open the fruitchouli structure of the eau de parfum to cut the flowers loose. May rose and jasmine give it a velvety, vintage-y heft, but the true delight comes from a somewhat less glamorous player.

Like the humble jersey Coco turned into couture, rose geranium, grown in Mul’s fields in Grasse alongside Chanel’s reserved crops of rose, jasmine, tuberose and iris, is given a star treatment in the fragrance. It is its rosy-minty freshness, glazing the velvet balsam and wood brocade, which gives Coco Noir Parfum the cool sheen of a black mirror.

The black mirror simile came to me before I knew black mirrors were a thing, and that they were used for scrying, which I didn’t know was a word (crystal balls are more often used than the former to perform the latter). Now, though an interest in the occult isn’t the first thing that springs to mind when thinking of the thoroughly modernist Chanel, she did have an interest in it – as did her Surrealist friends --, aroused by Boy Capel, the great love of her life. She first came to Venice, a city rife with masonic and alchemical symbols, after his death – the very death that compelled her to create N°5, according to Jean-Louis Froment, the curator of the N°5Culture Chanel exhibition. So that we might not be straying that far from Coco’s spirit when we conjure a few ghosts with Coco Noir Parfum’s black mirror…

And what is that specter? Chypre. Or rather, that part of chypre that runs from fruit to wood – tilt the Coco Noir Parfum axis a bit on the scent-map, and you come across an offshoot of Femme, Féminité du Bois (the original Coco’s spice-laden orientalism being the bridge between the two). Both co-authored by Christopher Sheldrake, the two scents aren’t similar, but there’s a similar balance in their fruit-wood-musk structure. So that when you nose-squint in that direction, Coco Noir suddenly becomes much more Byzantine… All you need is a bit of black magic.

Illustration: Detail from Tintoretto's Susanna and the Elders, c. 1555