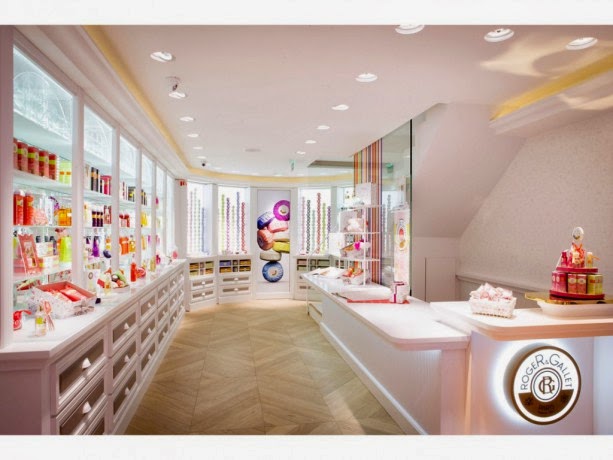 You can add another address to your next Parisian fragrance tour. Roger & Gallet, the historic house still churning out Jean-Marie Farina Extra-vieille, the original Eau de Cologne, since 1862, opened a flagship store last summer a few yards from Colette on the rue Saint-Honoré.
Though most Roger & Gallet products are now found in drugstores, the resolutely upbeat shop that’s got Japanese clients squealing “kawai!” offers a few rarer products, and special editions in bottles modelled after the one designed for Napoleon – who famously doused himself in Jean-Marie Farina’s Aqua Mirabilis  – to carry around in his boot when he was at war.

In a way, Roger & Gallet has developed a new type of sector in the market: with its well-made solinotes that don't bend over backwards to fit into the blockbuster codes, it works as a niche brand for the young (or the broke). Which makes sense since in bygone days, eau de Cologne was the sole fragrance the working class could afford.

In which I find an old favorite… 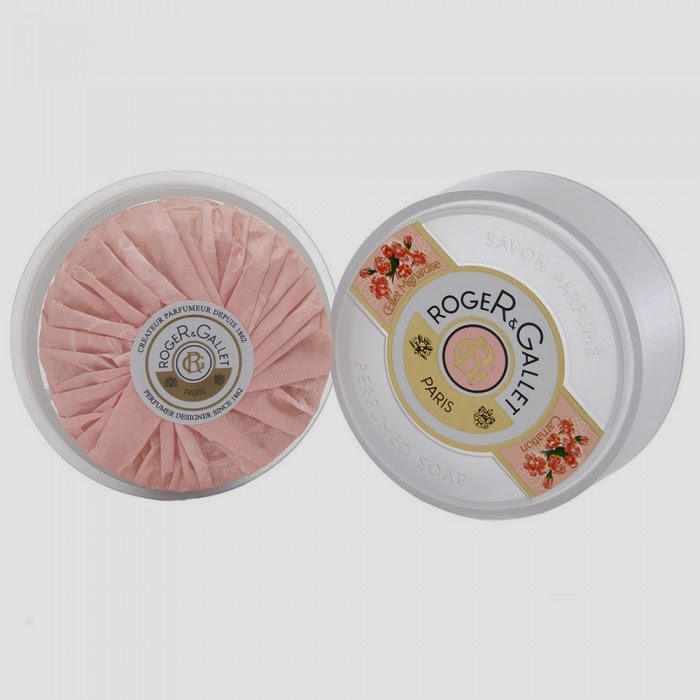 I was delighted to discover the gloriously retro Oeillet Mignardise soap in its dusty-pink wrapper – I thought it had disappeared. Nestled with other pastel-clad round soaps in a gift box tied with a colorful grosgrain ribbon, it makes for a lovely gift, every bit as tempting as a box of macarons but far less perishable. In the newer line-up, I’d pick out Dominique Ropion’s Bois d’orange, a great alternative to the Eau d’Orange Verte toiletries I get a few blocks away at Hermès (it also comes in individually-wrapped wipes). And throw in Shiso, Vetyver, Cédrat and Fleur d’Osmanthus to fill up a 6-soap box. Then of course I’d break down and keep it. The real surprise, though, came when the handsome and perfume-savvy store manager Damien pulled out two 80s gems. Roger & Gallet L’Homme is a proper chypre that anchors its sprig of spearmint in a woody-mossy base. Open looks like it popped out of a time capsule, down to its late-70s brown box and asymmetric plastic bubble cap. This is a tobacco aromatic with a hefty vetiver and patchouli base, with more than a hint of Équipage. Cheaply priced, but doesn’t smell cheap at all. Manly, yes, but I like it too, as the Irish Spring girl used to say.

… and a red ginger flower
Launched on April 1st, the new Gingembre Rouge is signed by Alberto Morillas (who also authored last year’s Rose Imaginaire) and Amandine Marie[i] – like Yves Rocher, Roger & Gallet attracts major talent (Bois d’orange is by Dominique Ropion; Fleur de Figuier by Francus Kurkdjian).
Unlike the earlier, more powerful and fairly linear Gingembre, this Zanzibar-inspired take on the theme is sheerer, which mercifully steers the juicy fruit top notes well away from jam. Throughout much of the development, the ginger hovers under a bright pomegranate accord, then warms the musk-swaddled base (“musk” being the Sevillan maestro’s middle name).

Three types of ginger take the note from top to bottom. First, a lemony-sappy fresh ginger. The press material mentions a Firmenich extract of the ginger lily, hedychium zingiberaceae when its mother is angry at it. The red flower on the box, however, shows its relative in the ginger family, alpinia purpurata, a.k.a. red ginger, which gives its name to the scent). Finally, a candied ginger accord in the base. The notes list also includes mandarin, orange blossom, “lychee blossom” and cedar.
Gingembre rouge is more of a scented veil than a powerhouse, but it is distinctive enough, very long-lasting and for its retail price (less than 40€ for 100 ml), a far better value than many costlier scents.

Roger & Gallet, 195 rue Saint-Honoré, 75001. Damien is in on Wednesdays, Thursdays and Fridays.
You can leaf through a (French) ebook of the brand’s history and drool over the glorious Lalique bottles made for Cigalia, Narkiss, Persana or Le Jade,  by clicking here.

[i] In the press kit, Marie lays claim to the fruity notes and explains she eschewed “old-fashioned” eugenols in favor of pink pepper; Morillas also credits her with the “crimson bouquet” that adds a “vegetal” effect in the heart notes.