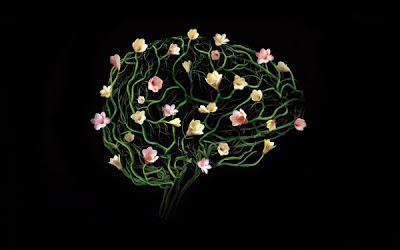 Last December I published the French version of this press release issued by the Centre National de la Recherche Scientifique (CNRS). In the wake of my previous post, I sought out the English version (unavailable when I first posted).

The regions of the brain associated with olfaction are more developed in professional perfumers than in the general population. In addition, the quantity of grey matter in the experts' olfactory regions increases in proportion to their experience. This new illustration of the astonishing plasticity of the human brain stems from research conducted by the Olfactory Coding and Memory team of the Centre de Recherche en Neurosciences de Lyon (CNRS/Inserm/Université Claude Bernard Lyon 1/Université Jean Monnet Saint Etienne). Based on anatomical MRI scans of professional perfumers, perfumery students and control subjects, it shows that training and practice make it possible to reverse the age-related grey matter reduction observed in olfactory regions among the general population. These findings were published in the December 12, 2012 issue of NeuroImage.

In previous research, the same team had shown that experienced perfumers could acquire the ability to imagine an odor clearly enough to “smell” it, even though it is physically absent, a capacity beyond the reach of “mere mortals.” The researchers had also noted that the greater the perfumers' expertise, the lower the activity in the olfactory and mnesic regions of their brains. This seemingly paradoxical result is explained by the fact that neuronal communication becomes faster, more efficient and more specific in the brain of an expert.

In light of these initial findings, the researchers wondered if perfumers' intensive training and practice also increased grey matter volume in the cerebral zones linked to olfaction. To answer the question, they performed MRI scans on 14 famous “noses,” including Jean-Claude Ellena and Daniel André. They also scanned the brains of 13 students from ISIPCA (Institut Supérieur International de la Parfumerie, de la Cosmétique et de l'Aromatique Alimentaire) in Versailles, as well as 21 “naïve” subjects with no olfactory knowledge or training.

The scans showed that grey matter in the primary olfactory cortex and orbitofrontal region neighboring the olfactory groove is greater in perfumers than in naïve volunteers. This cerebral development could be due to an increased number of dendritic arborizations1 or even a greater number of neurons, although this has yet to be proven.

The results also indicate that grey matter volume is directly correlated to experience. The more practice a perfumer has had, the greater the volume of these olfactory regions. On the other hand, the researchers noted that in naïve subjects, these cerebral regions shrink considerably with age, a continual and generalized phenomenon among individuals with no training or experience. This suggests that the cerebral modifications observed in perfumers are due to practice rather than innate capacity.

These findings recall the structural modifications observed in other types of experts, including musicians, athletes, mathematicians, multilingual individuals and taxi drivers. All of these specialists reorganize and overdevelop the brain regions specific to their field of expertise. The human brain's extraordinary capacity to adapt to environmental demands and transform with experience seems to be virtually unlimited.
References: Perfumers' expertise induces structural reorganization in olfactory brain regions. Chantal Delon-Martin, Jane Plailly, Pierre Fonlupt, Alexandra Veyrac and Jean-Pierre Royet. NeuroImage, 12 December 2012.