Boucheron: Diamonds go with everything 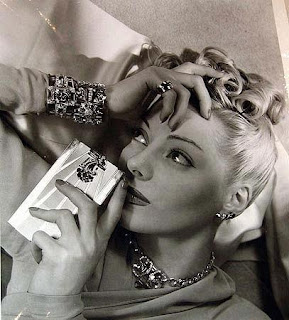 Hear that tinkling sound? Those are the iFrags cowering on their shelves, exhaling asthmatic little puffs of iso-e super. In the wake of a new licensing deal with Interparfums (Lanvin, Van Cleef & Arpels…), the 1988 Boucheron is being re-launched, and she’s going to show them how it’s done.


I never wore Boucheron back in the days and so can’t assess whatever nips and tucks it underwent. But such as it is, it’s a compliment-getter (and from people in the industry, no less). Despite coming twelve years after Van Cleef & Arpels’ First, the first jeweler’s perfume and perhaps the last straight-faced aldehydic floral, the scent belongs to the classical era: a haughty, hefty, complex floriental carrying some of L’Origan’s DNA by way of Bal à Versailles. Both the 1988 Boucheron and the 1962 Bal à Versailles were already somewhat retro at the time of their launch.
This classical stance was deliberate: in Michael Edwards’ Perfume Legends, Boucheron Parfums CEO Jean-Claude Le Rouzic explains that the “aggressive” style of 80s blockbusters like Poison and Giorgio was the last thing he wanted.
In his Journal of a Perfumer, Jean-Claude Ellena explains that in First, he “collected, borrowed and piled on all the signs of femininity, wealth, power”. Firmenich’s Francis Deléamont and Jean-Pierre Béthouart worked on a similar idea, glazing the honeyed (broom, narcissus), heady (jasmine, orange blossom) and balsamic (tonka bean, vanilla) warmth of the base notes with a hard, pearly sheen. Both effects – the cold, sparkling top notes; the opulence of the floral heart and oriental base – convey the idea of luxury, as well as the feel of a strand of pearls: cold and hard at the outset, warming and coming alive on skin…
Because it refers to the heritage of perfumery, the fragrance also achieves the same heirloom quality as Boucheron’s jewels. Boucheron Eau de Parfum has the natural authority that comes from being the offspring of a long line of classics; somehow, despite its grandness, it is an easy wear. Was it Elizabeth Taylor who said diamonds go with everything?
Photo: Helen Bennett by Horst P. Horst, c. 1937
Posted by carmencanada /Grain de Musc at 10:21