Neela Vermeire Créations: Mumbai by way of Paris (and a draw) 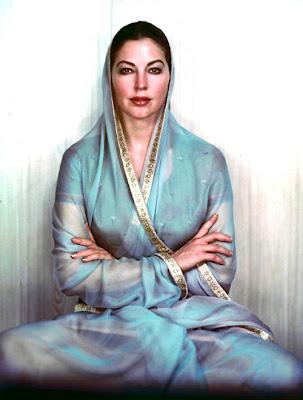 Surely a perfume lover’s fondest dream must be to see her ideas translated into a fragrance. And when I met Neela Vermeire through a common friend, that’s what she was, a perfume lover, albeit one who had already converted her passion into a sideline activity, the “Perfume Paths” guided tours. Those paths ended up taking her to her native India and back to Paris where she has been living for years, for a tour of the labs where she took her project: a collection of fragrances based on India’s heritage, expressed in the idiom of contemporary French perfumery. Unsurprisingly, given his taste for far-flung journeys, track record of olfactory travel sketchbooks and first-hand knowledge of India, Bertrand Duchaufour proved the most receptive to the concept.
Neela’s journey from learned amateur to brand owner may also be a pioneering one…
The more I delve into the wings of the industry, the more convinced I am that the era of blockbusters is over, at least in the West (although the huge, naïve market of China will certainly be receptive to pre-formatted iFrags, not having known better). If perfumery is to move forward – and to move souls – it must pursue intensely personal sources of inspiration rather than one-size-fits-all marketing briefs.
This inspiration can come from the perfumers themselves; from other fields such as art, literature or cuisine; or from individuals like Neela, with stories to tell, a heritage to express, a longing to fulfil (I am also thinking here of Like This by État Libre d’Orange, tailor-made by Mathilde Bijaoui for Tilda Swinton: a quirky, personal fragrance that managed to move many other people.) For these three scents though, the cross-pollination occurred between Neela’s research on each historical period rather than on personal stories, and the perfumer’s memories.
Bombay Bling: Fluorescent Floral
Diana Vreeland once famously said that pink was the navy blue of India. And if anything, despite its dominant white floral bouquet, Bombay Bling is all garish colours: a Taj Mahal-sized, raspy green mango bursting into vibrant Tyrian pink – I’m detecting raspberry-ish undertones though the notes list lychee. The scent manages to be both velvety-plush and uninhibitedly, joyfully loud in much the same way as big-haired, shoulder-padded 80s juices – this could called “Giorgio does Bollywood”.
And much as 80s feminine attire could be so over-the-top it almost hinted at cross-dressing, Bomblay Bling performs a rather fascinating Victor-Victoria act mid-development, unveiling a woody-tobacco base with distinctly fougère undertones behind its lush rose-tuberose-gardenia bushes.
Mohur: Retro Rose
Like all three compositions, Mohur is symphonic scent and can be entered at many different levels. It is structured around a traditional rose-oud accord, but this is not necessarily the first thing that jumps out: my initial impression was of a lush rose-iris, in a grandly classic style that’s fairly uncommon in Bertrand Duchaufour’s work. It is, however, set in a space he’s already explored on the olfactory map with La Traversée du Bosphore, rose-violet-iris-leather with almondy accents, and the lesser-known Mon Numéro 8, a tribute to Après l’Ondée (given the volume of their author’s output, it’s starting to make sense to think in terms of series within specific genres, with distinct but related effects dictated by the logic of certain harmonies between their notes).
Mohur and Bosphore don’t smell the same, but they rely on a similar sleight-of-nose trick: conjuring a piece of pastry within a bouquet. Instead of Turkish delight, the sweet of course is Indian, featuring two mainstays of the Duchaufourian palette, cardamom and carrot (the latter a complement to iris), blended with a touch of milky, floral (hawthorn) almond, drizzled in rose water. Mohur’s slight soapiness keeps it from veering into pastry; because of the whopping amount of rose absolute used in the formula, it gives off a retro vibe that is very likely to appeal to vintage perfume lovers.
Trayee: Smoky balsam
Smoky, spicy, resinous, balsamic, Trayee ticks all the boxes that will endear it to niche perfumery enthusiasts; of the three, this is my favourite, as it is Kevin’s from Now Smell This, who reads it as an apothecary shop, and Persolaise’s, who gets a malai kulfi effect.
To me, Trayee is built upon the contrasts and connections between smoke and balsams, the former provided by the “ganja accord”, clove, sandalwood, vetiver, incense and oud, the latter conjured by myrrh, vanilla and amber notes. On paper, it comes off as an almost combustible blend of spices and woods with burnt leather undertones (saffron and oud), lit by a green flash of cardamom, blackcurrant and basil. On skin – mine, at any rate – it mellows into rich balsamic notes with a prominent sandalwood and jasmine accord. Persolaise pinpoints a filiation with Samsara, and I tend to agree. But where the grand, late 80s Guerlain has always put my liver through the wringer, Trayee achieves a more modern, better-balanced elegance: Duchaufour’s deft manner at giving volume and structure to “thick” notes lets the richness of his materials breathe and soar.
The Neela Vermeire Créations website is now selling 2 ml sample sets and 10 ml discovery kits. For the readers of Grain de Musc, Neela has kindly given a sample set.
So just drop a comment about what India smells like – or of what an India-inspired scent should smell of – to you, and I’ll ask Miss Jicky to do a paw-draw.
Photo: Ava Gardner in George Cukor's Bhowani Junction (1956).