Madame Grès exhibition in Paris: with Bourdelle, but without Cabochard 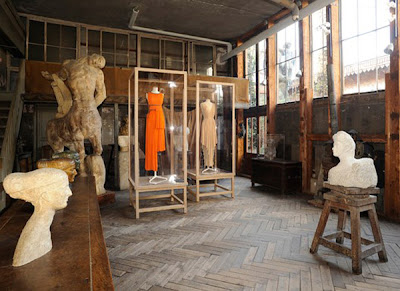 “Cabochard” is a now-obsolete adjective meaning “headstrong”, and it certainly applies to Alix Grès. Visiting the current Grès exhibition in Paris is a lesson in obstinacy. Madame Grès created her first signature drapings in the 1930s when she was still known as Alix, from the house of Alix Barton, and she stuck to what she knew and did best. Putting on the exhibition at the Musée Bourdelle while the Musée Galliera (which is the museum of fashion for the city of Paris) is being renovated is a felicitous choice. Antoine Bourdelle (1861-1929), who worked with Rodin and went on to teach Matisse, Maillol and Giacometti, created classically-influenced sculptures whose majestic volumes act as counterpoints to Madame Grès’ stately, delicate dresses. The couturier, who was deeply influenced by classical Greece herself, had wanted to be a sculptor and indeed, she did consider herself a sculptor. She even married a sculptor to drive the point home: Serge Czerefkow, known as Grès, the modified anagram of his first name. And thus, the former Germaine Krebs took on the name that is French for “sandstone”…
Of the two oeuvres confronted in the rooms of the Musée Bourdelle, it may be Grès’, despite its fragile, ephemeral nature, that seems the most timeless. If it is possible to ascribe a decade to her daywear, her cocktail and evening gowns remain so steadfastly anchored in her signature style that only the slightest details distinguish a pleated dress from the 30s from her sister from the 80s. Any one of those gowns could be worn tomorrow: none could be produced today.
It is, however, a pity that amongst the 80 pieces, sketches and photographs by Horst, Hoyningen-Huene, Beaton, Clarke or Bourdin, with their strikingly goddess-like models, the house of Grès’ contribution to perfumery is barely acknowledged in the biographical recap. Perhaps because she herself never thought much of it. In the documentary shown in the exhibition, shot in the early to mid 70s, she is asked about perfume. She dismisses it by saying that it is very different from couture because she can’t do things herself and needs a “chemist”. There isn’t even a bottle of Cabochard on show.
In Michael Edwards’ Perfume Legends (at least in the French edition, which seems to be slightly different from the original), Guy Robert, who is also the book’s French translator, recounts a little-known episode of the Cabochard saga. When Alix Grès decided to launch her own perfume house, she first approached Guy Robert to recreate the smell of a flower she’d discovered during a trip to India in 1956, as rich as tuberose but warmer, with cool slightly green top notes. Robert deduced it must be water hyacinth, and composed a perfume around the scent. It was called Chouda, and slated for release as the first Grès perfume. But meanwhile, other labs had had wind of the opening of a new perfume house, and a representative of Van Ameringen-Haebler, which was to become IFF, soon showed up with a sample he’d “filched” from the lab of Bernard Chant, a leather chypre in the style of Bandit, but more floral and rounder. It came out as Cabochard, and was launched at the same time as Chouda. Apparently, Mme Grès didn’t like the former much, but chypres were the rage at the time – Miss Dior and Femme were huge best-sellers in the 50s -- and her sales rep had worked for Piguet, where he’d had great success with Bandit. Chouda soon wilted under the onslaught: according to Guy Robert, only five litres were ever produced, and most of it was used up by Madame Grès.
Most: but not all. It just so happens that I found a tiny bottle of Chouda on eBay a few years back. I wrote to Guy Robert to verify that the scent was indeed as rare as he’d said, which he confirmed. And so, a few drops of the parallel history of perfumery landed in my collection.
Is Chouda a lost masterpiece? Stay tuned for the next post…
Madame Grès: La Couture à l'oeuvre
25 March - 24 July 2011
Musée Bourdelle
18, rue Antoine Bourdelle
75015 Paris
Tél. : + 33 1 49 54 73 73
www.bourdelle.paris.fr
Open Tuesday to Sunday from 10 AM to 6 PM except on holidays