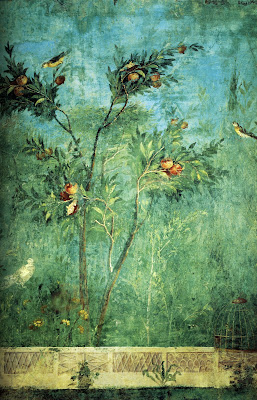 The brief: a garden in Sicily. The inspiration: the classic Eau d’Orange Verte, with its blend of sparkling citruses and green notes – mint, cassis and buchu leaf.
But Bertrand Duchaufour’s Jardin du Poète for Eau d’Italie quickly veers from its initial “green orange” cologne vibe with an added cold-spice vibrancy (cardamom and pink pepper), into something milkier and moister. The fruity, sulphurous facets of the cassis, buchu leaf and grapefruit tug the muguet/cyclamen/rose heart notes towards something a little tropical, between mango and melon. The effect, stronger on paper than on skin, is slightly reminiscent of his Fleur de Liane for L’Artisan Parfumeur. Along with fig leaf and fig milk notes, it conjures the green shady patches of the Mediterranean island “poet’s garden”.
Alongside the wet green shade, the sun-baked vegetation of the garden is evoked with whiffs of hay, moss and immortelle. The citrusy facet of cypress drives the top-note hesperidic accord right into the base notes, its aromatic, camphoraceous facets conjuring the combustible smells of rocky Mediterranean hillsides.
With its contrasting cool/warm and moist/dry effects, Le Jardin du Poète veers off significantly from the dark, majestic, austere weirdness of the initial Eau d’Italie/Duchaufour collaborations – Baume du Doge, Sienne l’hiver, Bois d’Ombrie. As a consequence, it is easier to like and wear, but won’t command the same type of puzzled fascination as the earlier oddballs. Clearly this is the direction the owners of the Le Sirenuse hotel want to take, since their last three scents have been on the tamer, more delicate side. This is not Duchaufour at his most virtuosic, but shows he can work in a quietly lyrical mood – when he’s asked nicely.
Illustration: Pompeian-style fresco from the Villa Livia in Rome
Posted by carmencanada /Grain de Musc at 10:51