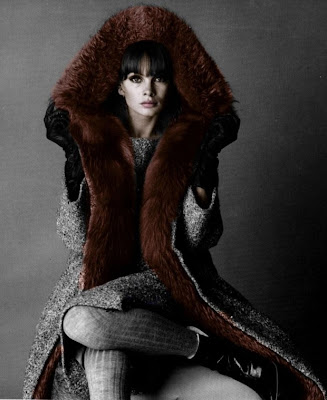 On the level? I can’t say I’ve worn any ten perfumes regularly this winter. I tend to test new things rather slowly, one at a time, over several days; I seldom wore any during my Christmas holidays in Canada because my father can’t stand fragrance; I go commando during my London courses since we’re already smelling so many things. And while I’m working on the book, I don’t like to be distracted – I’ll kick into analytical mode even with a familiar fragrance -- which means I’m often scentless on those days as well.
What to do? Here’s the list of the perfumes I was drawn to over this particularly harsh winter, either because I actually managed to wear them more than five times in the season, or because I wish I’d had the chance to…
Encens Flamboyant (Annick Goutal) was in last year's top ten and it's still going strong: it's become a staple of my Christmas holidays in Canada, its burnt mineral darkness and resinous undertones a counterpoint to the blinding scentless void of snow. The whole line is remarkably faithful to the fragrance and I’ve taken to burning the candle while soaking in the bubbles from the shower gel. An incense bath seems like a contradiction in terms, but there you go.
L’Heure Fougueuse (Cartier) aka "the Horsy one" is emerging as one of the best 2010 launches – so far it’s been getting nothing but praise in the blogs but also in the industry, including someone from a major niche brand who told me “Now why didn’t we put that out?” This beautifully constructed tribute to Eau Sauvage may be Mathilde Laurent’s best composition yet and one that can still give me that roller-coaster flutter in the stomach every time I wear it.
La Traversée du Bosphore (L’Artisan Parfumeur) makes it over from last fall’s Top 10. When all is said and done, the Turkish back story plays no role in the pleasure I get from wearing it: I find it a deliciously joyful fragrance, with an original treatment of leather, a rose/vanilla/musk powder puff effect that manages to feel both edgy and easy to wear, and a lovely soaring volume.
Bois de Violette (Serge Lutens) is what I turn to for warmth: the candied sweetness of violet sheds a melancholy amethyst light on the resinous dried fruit and woods. I find the pencil-shavings facet of the cedar comes out more strongly in the cold. This is still, with La Myrrhe, one of the most remarkable Lutens.
Dans l’Atelier de Cézanne is, I’m sorry to say, an Olivia Giacobetti candle you’ll probably never get the chance to smell: it was produced last summer in a limited edition with and for the French artist Vincent Beaurin for the first contemporary art exhibition ever to be held at Cézanne’s studio in Aix-en-Provence. It is a serene, ghostly scent of dust, bees wax and linseed oil and a rarely used material, Alaskan cypress, with mineral accents and that dry, pencil-shaving cedar smell I seem to crave in this season. This is Giacobetti’s third collaboration with Vincent Beaurin. For retailers of this rarity, click here
I’d lie if I said I gave Like This (État Libre d’Orange) a lot of wear. In fact, I don’t have more than a sample to my name: by the time I got round to it, there’d been such love heaped on it I felt it was pointless to add a review and turned to other things. But the one spray that hit my skin fell on it like a sunset over snow-scorched grass.
Habanita (Molinard) is a scent I may never wear again – it is one of the very few too anchored in my past for me to revisit it. But through a kind friend in the States who stumbled on a stash in a consignment shop, I managed to nab a sealed, boxed bottle whose date of production was confirmed by the newspaper page that was wrapped around the bottle to prevent it from jostling: 1947. The tobacco effect still stands out vividly. Strip it down to its bearing walls – aldehyde C11, coumarin, cistus, oak moss, musk ketone, methyl ionone – and you’ve got the backbone of classic perfumery.
Le Temps des Lilas (Houbigant) came from the same source. The name conjures the faintest memory of a song heard in childhood – it was composed by Ernest Chausson and sung by one of my father’s favorite baritones, Gérard Souzay. The scent, from 1923, is like a melodic line teased out of the real, vintage Quelques Fleurs. I only own a few drops, and because it is lilac, a fragrance now clouded by extensive use in toilet sprays, I didn’t pay much attention at first to the blotter, except to note muguet, rose and apple facets. When I returned to it, it had blossomed into the most realistic rendition of lilac I’d even smelled. I’ll treasure those few drops of spring until the real thing comes along.
Now for the rest of my winter favorites, I’ll take a page from Bois de Jasmin’s book and venture out of the realm of fragrance with…
Redbreast 15-year old pure pot still Irish whiskey: this bottle popped up during my latest dinner party and I just had to confirm that first impression of chocolate liqueur smoothness... Let's see:  blackberry, cassis... check. Is there really clove, cinnamon and cardamom? Definitely. Let's try again for vanilla, gingerbread and ylang-ylang... Yup. Now you know how I almost ended up doing an Edina getting out of the cab. Next time, I think I’ll just spray it on…
Roasted chestnuts are now mostly and somewhat puzzlingly by young Sri Lankan men, so that the classic cry of “Chauds les marrons” is no longer heard. But sweet smoky aroma of the finger-burning treats in their charred husks is the smell of Parisian winters.
For more winter top tens, see Bois de Jasmin, Now Smell This, Perfume Posse and Perfume-Smellin’ Things.