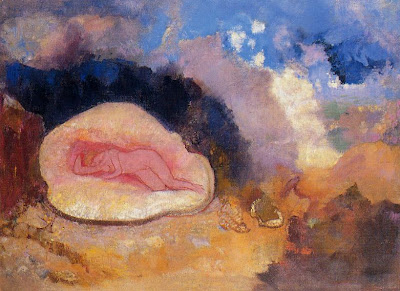 How are perfumes born?
Well, it can go like this. Claude Marchal, the genial owner of Parfums MDCI, decides it’s just about time to come up with a new product: it’s been two years since the last launches. Perhaps a white floral? A gardenia maybe? So he reaches out to Bertrand Duchaufour (who may well become The-Perfumer-who-ate-Niche in 2011, at the rate he’s going).
It turns out neither of them is wild about the gardenia idea, especially since Claude Marchal realizes he doesn’t actually like the smell of it. So Duchaufour goes through a few floral essences with him. One of them is a gorgeous weirdo that doesn’t even smell of flowers, but of apricot jam and leather. For Mr. M. it’s love at first sniff. Osmanthus it is, then. Perhaps not straight up, though? Well, Mr. D. has been fiddling around with a pear-iris accord he’s quite happy with. So is Mr. M. for that matter. Could the osmanthus be worked in instead of the iris? It could. Sold! One pear accord, to the gentleman with the white shock of hair.
“La Belle Hélène” was the working title from the get-go. The inspiration wasn’t so much the face that launched a thousand ships as poires Belle Hélène, pears poached in syrup and served with vanilla ice cream, chocolate sauce and crystallized violets. The recipe was invented by the legendary Ritz chef Auguste Escoffier – who also came up with peaches Melba and crêpes Suzette – and named after Offenbach’s 1864 scandalously sexy, adulterous romp of an operetta (with his bent for naming his fragrances after books and operas, Claude Marchal has decided to keep the working title).
Though there is always a profound logic to classic desserts, all that remains of Escoffier’s recipe are pears and violets, the latter conjured by the ionones in osmanthus. And ionones are what rise out of the top notes along with the ethereal, almost acetone-like tartness of the first bite of pear. There is almost as much to roll on the tongue here as there is to smell: the textures of the fruit and its flavours, from the silky skin to the heavy-bottomed juiciness of the flesh. Green at the outset with violet leaf; rosy when the juice drips into the floral heart notes; softening into the musky sweetness of warm pear.
The next fruit to roll out of the basket is a ripe apricot or rather the apricot-jam of osmanthus wedded to rose through their common damascones – there 1% osmanthus absolute in the formula deploying its orange, violet and burnt umber tones. A dab of orris butter intensifies its woody/powdery violet facet; the leather is picked up by a woody liquorice accord.
It is the liquorice wood which entices the beautiful Helen out of the fruity floral realm and tickles this amiable pastel with Duchaufour’s trademark sombre brushstrokes. The effect runs through the entire composition, from the slight anisic effects of the top notes to the burnt sweetness of the base (myrrh, vetiver, patchouli, oak moss and a touch of a roasted note create the accord). Sandalwood adds a touch of smoky milkiness.
But underneath the pear, osmanthus and liquorice flesh, La Belle Hélène has the backbone of a chypre. Granted, though tangerine stands in for bergamot, the canonical notes are all there: rose in the heart; patchouli, vetiver and oak moss in the base. And granted, being light on the moss and heavier on the musk, it’s much more of a neo-chypre than the intensely classic Enlèvement au Sérail in the same house. But it’s a chypre.
You might find La Belle Hélène uncharacteristically tender and delicate for its author, a direction hinted at in the powdered sugar and lokum of La Traversée du Bosphore, but though it is less extroverted that the latter, it is based on the same type of contrast between juicy fruit flesh and darker notes, a contrast found in osmanthus itself. And it’s got something of the same light-heartedness, a springtime sense of fun with just the right touch of wickedness…
I’ve been wafting La Belle Hélène’s discretely gourmand sillage for a solid week quite happily and now you’ll get a chance to bathe in it: Luckyscent and Parfums MDCI have teamed up to offer two full-sized, 60 ml bottles of it, one for residents of the USA (courtesy of Luckyscent), one for the rest of the world (offered by Claude Marchal)…
So drop a comment saying you’d like a chance to win a bottle of La Belle Hélène, and don’t forget to say in which country you live – you won’t be entered in the draw if you don’t.
I’ll announce the winner on Monday: names will be picked, as usual, by Mademoiselle Jicky.
Illustration: The Birth of Venus by Odilon Redon