My Top Ten Perfumes of Autumn for 2010 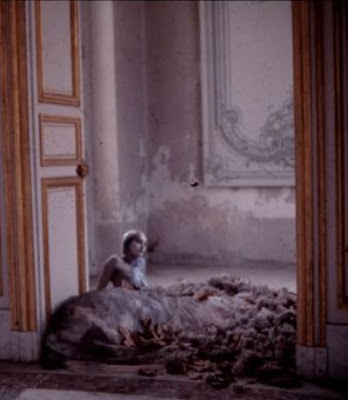 I’m a cheat.
No, actually, were I cheating it would be to win, but just now I’m at a loss. Blogger’s syndrome, I’m afraid.
If you’re testing so many new things that when you take a day off testing, you have no idea what you’d want to wear out of your own collection, you just go commando, or back to the latest test. Besides, as long as the scent isn’t reviewed, you can go on enjoying it: once your thoughts have been committed to words, you feel compelled to move on to the next vial. So sometimes, you hold back the review as long as you can.
It’s as though you were constantly running into intriguing strangers, not really knowing which would become friends or lovers, losing touch with the old ones. And when you’ve lost touch with something you wore fairly frequently – if only for testing purposes – during a spell, it becomes associated with that period. Thus: divorced from your life now.
Andy Warhol used to wear a fragrance for, what was it? One month? And then label it, box it, and retrieve it now and then to relive the period, but never wear it again. I don’t even have that kind of method: my perfume-related memories are scrambled and haphazard, a collage of random moments in my life. Hence the fact that all of these selections but two are very recent launches (three aren’t even out yet -- I've already taken out a loan on the future.)

Which of the associated memories are real, which are invented? I told you, I’m a cheat, and what I cheat on the most are my perfumes… This top 10 has got nothing to do with fall, just with falling in love… repeatedly.
I am an olfactory Casanova.
Midnight in Paris by Van Cleef and Arpels
What: The chicest mainstream launch of the season. Olivier Polge and Domitille Bertier lifted the rubbery black tea and styrax note from Bulgari Black, dipped it in balsams to tame its urban snarl and matched it with Dior Homme’s tonka and woods base. When remix is done that impeccably, it becomes a creature of its own.
When: Crossing over the Seine under a light drizzle in time to see the Eiffel tower put on her glittery disco cloak at the stroke of twelve.
Minuit Noir by Lolita Lempicka
What: This season’s limited edition reprises the success of the 2007 Caprice Réglisse: according to Annick Menardo, Minuit Noir goes straight to the essence of the original Lolita Lempicka: more jasmine, more iris and above all, more liquorice, a note Menardo loves for its burnt facets.
When: Dark, mouth-burning anger, chewy enough to feed me and invigorate me. The trashy fairy’s liquorice candy is an exhilarating potion.
L’Heure Défendue by Cartier
What: Patchouli brings out cocoa’s inner animal. It’s sleek, but it bites.
When: Instead of dessert. Just zip me out of that chocolate leather skirt.
L’Heure Fougueuse by Cartier
What: The 21st century’s answer to Eau Sauvage, Mathilde Laurent’s oddly compelling hesperidic-fougère-chypre leather hybrid that jumps over the hurdle of gender divide.
When: Walking briskly between Miromesnil station and the parc Monceau for an appointment on a crisp fall morning. Those last few minutes before I put on a professional show belong to me, to my moving body, my swiftness, the air.
Dzing! by L’Artisan Parfumeur
What: A whiff of manure, rough leather, wet Kraft cardboard, sleek-cat musk, this is scent-as-narrative, even if you don’t know the story spun by Olivia Giacobetti.
When: Monsieur sniffs distrustfully. “I don’t know about that fragrance you’re wearing. It’s somehow antiseptic.” I pull him in to breathe in my neck. My sillage: cresolic, and thus, labs and hospitals. My skin: musk and hay. “You should never wear this across the table from me”, says Monsieur. “Just up close.”
Absolue pour le Soir by Maison Francis Kurkdjian
What: If perfume lovers test their mettle by the skank level they can endure, this could be the ultimate challenge: cumin-sweaty, civet-beastly, leather-kinky. I’ve been smelling it in the trail of a couple of boys and they definitely mark their territory. Delicious.
When: The artist Jean-Luc Verna (WARNING: Not an office-friendly link) skin embroidered with tattoos, glittering with piercings, is performing “Trust in Me” from The Jungle Book. He removes his neoprene shirt. A wave of fresh sweat, tinted with the faint rubberiness of neoprene, rides on a crest of male hormones while his bass voice vibrates all the way down my body to my zebra spike heels.
Les Ailes du Désir by Frapin
What: A burning whiff of cognac before you dive into the cask: this is boozy wood laced with spicy flowers. Bertrand Duchaufour’s first scent for Frapin will be out in November: stay tuned for a proper review.
When: The thermometer has dipped below zero Celsius outside the tiny garden guest house near Colette’s native village, but there’s a duvet, and there’s rum, and in the middle of the night his hand will reach out to me while he dreams, tender and impersonal.
Boxeuses by Serge Lutens
What: Russian leather, mulled plum and violet wrapped in smooth waxy amber.
When: I wore it for Him, but He didn’t notice. I’d come to see the Wizard, had prepared my questions, but he was quicker than me and shot back with his own, and then questions were forgotten and we felt we’d always know each other, which was a wonderful lie, and I believed it.
La Traversée du Bosphore by L’Artisan Parfumeur
What: The iris absolute is real. The rose and pistachio Turkish delight an olfactory illusion carried by a leather slap. A stunning balance of tart and sweet, raspy and smooth, yin and yang.
When: The pastry chef, who’s the nephew of the bride though he’s older than her, is leaning towards me, but he’s ogling the girl across the table, who’s wafting Dior’s brand-new amber-laden Mitziah. Thank God. Turkish delight plus a pastry chef would have been overdoing it.
Habanita by Molinard
What: A 1948 bottle of the extrait, authentified by a newspaper stuffed inside the box. Nitro-musks and musk ambrette make the vetiver, vanillin and coumarin pop out so vividly they take on the texture of a lioness’s pelt. The tobacco, leather (isobutyl quinolin) and oak moss base add their growl. This is what the tough girls picked over Shalimar back in the Jazz Age.
When: Fur wrap taken out for the first time this season over a garnet crushed velvet bias-cut shift, leaning against the wall outside the club, smoking with the boys, a little drunk, not caring much whose fingers it is that are running through my collar.
For more Top Tens, check out the usual suspects...
Bois de Jasmin
Now Smell This
Perfume Posse
Perfume-smellin' Things