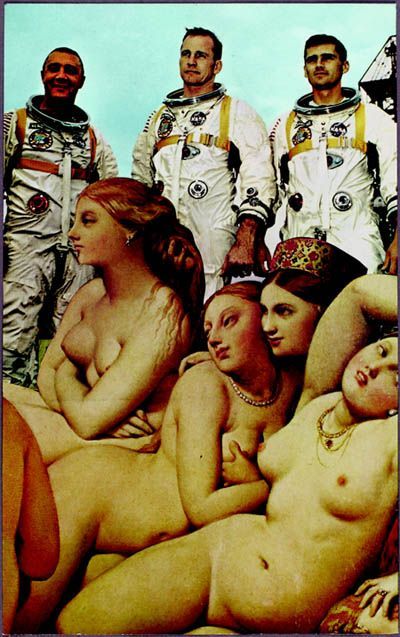 For a perfumer planning a trip to Istanbul, it’s apt to get mighty crowded on the Orient-Express… Not only has the perfume industry been wearing out the seats ever since it became an industry (pretty much at the time when the Orient-Express started running), but Serge Lutens has permanently booked compartments in most of the cars: you’d be lucky if you could even find a bunk. Besides, when you compose an olfactory travelogue – the principle of L’Artisan Parfumeur’s “Smells stolen by a travelling perfumer” collection, now apparently renamed “Villes et voyages” -- how much do you actually capture in situ? Many of the smells encountered outside the sanitized West are un-exploitable; the ones you pick must be sufficiently symbolic of the chosen destination to conjure it, even for people who’ve never been there. You might as well stay home and leaf through a pile of National Geographic magazines.
Or you might skip the Orient-Express altogether, take the modern version of a flying carpet, get marooned in Istanbul by the volcanic ash cloud, sniff around the Tulip Festival – they do have a scent, sappy/sweet, slightly aqueous and a little sperm-like – and get hooked on pomegranate juice…
Bertrand Duchaufour did go to Istanbul, as it happens, and he’s got the pictures to prove it (they’ll be exhibited at Henri Bendel’s in New York for the launch of La Traversée du Bosphore). But, not unexpectedly, he played hooky on the belly-dancer-and-spice-bazaar guided tour. In other words, he hasn’t done an oriental, not in any classic sense. What drew him to Turkey may have been his hankering to work on the leather note; what he brought back was a brightly-coloured, playful collage of olfactory vignettes stitched onto that piece of Turkish leather.
The aforementioned tulip and pomegranate are tiny, sneeze-and-you-miss’em details; the apple looms larger, a quote of the apple-flavoured tobacco smoked in hookahs all over the former Ottoman Empire and of the ubiquitous elma çay, the Turkish apple tea. But the bulk of the picture is taken up by a chunk of Turkish delight the size of the Hagia Sophia Dome: however distinct the leather note in Bosphore, the scent is also disconcertingly sweet and thus, the polar opposite of Duchaufour’s earlier, moodier, chiaroscuro travel impressions.
Mercifully, the leather accord is not a literal rendition of the whiffy skins fobbed off to tourists ("see artisans at work!"), but a suede-type note, alternately velvety and raspy depending on the way you touch it. As for the rose, pistachio and saffron-flavoured Turkish delight… Just don’t hang around anyone with a sweet tooth: you’re apt to get a chunk nibbled off from your arm.
The contrast between these two main accords is bridged by apple and rose. The tart, juicy burst of apple in the top notes adds a touch of brightness to the darkness of the leather and dries up the powdery lokum accord, while hooking up with the rose through damascones (some of which have both apple and rose facets).  It straddles the two major textural effects of Bosphore: its fruitiness leads into the sweet, melting chewiness of the lokum; its raspy, acidic character – which can be stretched into conjuring pomegranate juice -- introduces similar effects in the iris and leather accord. This accord is in turn picked up and intensified by both the metallic and leather facets of saffron, which also acts as a symbolic/olfactory bridge in the composition since it often matched with rosewater in Levantine sweets.
The rose growing out of the lokum is, of course, another reference to Turkey since the country is a major producer of Rosa Damascena. It acts as the core of the formula, in an arc going from the green and fruity facets echoed in the apple, to jammy notes conjuring the lokum, and then on to darker undertones that blend in with the woody base.
However, the real surprise in Bosphore comes from an amazingly palpable caster sugar dusted all over the leather and lokum, as though the vanilla had brushed the musk at just the right angle to blow a powdery veil into the air -- you can fairly taste it on your tongue.
In a way, Bertrand Duchaufour has reversed the proposition of Havana Vanille/Vanille Absolument, which was to pull vanilla out of the gourmand register, by turning his leather into something you eat.
Either that or you’ve forgotten to peel off your gloves when you tucked a piece of Turkish delight between your lips. And licked the sugar off the leather.
Illustration: Turkish Bath by Erró
Posted by carmencanada /Grain de Musc at 18:00