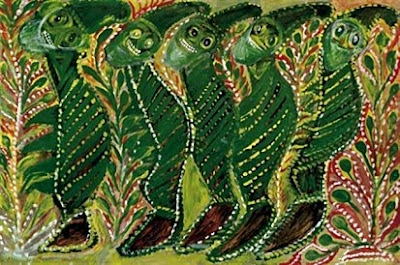 When Fleur de Liane was launched I was perfectly willing to test it, until the dread word “aquatic” sent me running into the wilderness muttering “the horror… the horror…” Colonel Kurtz style, Duchaufour or not Duchaufour. About a month ago, dropping by the L’Artisan flagship store on the rue de l’Amiral de Coligny, I boldly picked up a bottle, gave myself a good squirt, and moaned to the perfumer Stephanie Bakouche, who works there, that I now needed a good scrub. How she talked me into accepting three samples to test at home is a tribute to her pedagogical skills. And she was right: it did need further testing, and I am now a convert.

Aquatic notes are mostly used to convey impressions of freshness. Not so here. Like the Panamanian island jungle that reputedly inspired it, Fleur de Liane is damp and vaguely threatening under it tropical lushness. Reverse-engineering Bertrand Duchaufour’s recent exploration of floral accords, I’d say that he was already working on Amaranthine’s thick, turbid milkiness here. Under his fictitious jungle vine flower there is more than a hint of vegetal decay brought on by the earthy/rooty facets of patchouli and vetiver, along with a slight mushroom note. It is this whiff of corruption -- along with the creamy density of the floral accord and its indolic, honeyed animal notes -- that skews the muguet/magnolia away from its dominant green soapiness and into more disturbing territory. Metallic effects lurk somewhere in the blend, perhaps alluding to the blood that must be spilled in the jungle undergrowth.

Revisiting Fleur de Liane after having experienced Amaranthine sheds new light on the direction Bertrand Duchaufour was taking before it became spectacularly obvious that he would go on to become a master of the uncanny floral. It also goes some way into reconciling me with the aquatic note, when it is ripped out of the cliché that Cool Water, L’Eau d’Issey and their clones have become. In the jungle where Fleur de Liane grows, the vines could strangle you. Piranhas patrol the waters. And somewhere in the foliage, the Lord of the Flies may be lurking. Which is just how a jungle should be.