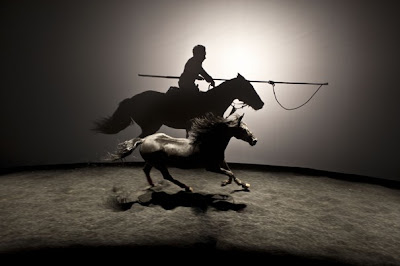 La Diaphane, La Fougueuse, La Défendue… The Diaphanous, the Spirited, the Forbidden. These could be the names of French warships or of the patches women adorned their faces with in the 18th century.They are, of course, the names of Mathilde Laurent’s new Heures de Parfum for Cartier, to be launched in November and presented today amidst the gold and diamonds of the jeweler’s new collection. I’ll be writing full reviews of these once I’ve got a chance to live with them. So far, I’ve worn two, and I’ve found them gutsy, generous yet subtle – the type of scent that should have been put out, say, by Guerlain. Their loss, Cartier’s gain.

L’Heure Fougueuse (the Spirited Hour) is one of those compositions that seem to shift according to the way the light hits them. I get whiffs of a tea -- it features one of Mathilde Laurent’s favourite materials, maté, which she’s already used in La Treizième Heure and considers the new oak moss, and Karismal, a hedione-like material – with drops of lemon juice from the magnolia accord in the top notes. Then I get whiffs of hay and funky, warm leather, but leather on a live animal. And that animal’s a horse. Mathilde’s stated intention was in fact to create a new type of animalic accord. I’ve been swivelling my head for the past two days, wondering whose skin smelled so delicious – rather than which perfume had caught my attention. It was me: a female Centaur.

L’Heure Défendue (the Forbidden Hour) is what Mathilde calls a “black oriental”: a treatment of cocoa as a non-foody note. “I wanted to use it as a real perfumery ingredient”, she explains, “to give it the same status as vanilla.” The dark chocolate – patchouli accord is a natural, and has been featured both in Angel and Bornéo 1834, but where the former drowns it in sugar and the second plays on an oddly dry, powdery milk chocolate note, L’Heure Défendue is unremittingly dark, rose-infused, soft and warm as cashmere – in fact, it melts into Cashmeran, “a material I could drown in”, says Mathilde.

L’Heure Diaphane (“The Diaphanous Hour”) is an opalescent rose-peony-lychee accord with overtones of hawthorn. I haven’t worn it and truth be told, its delicate notes were eaten up by the leather, chocolate and patchouli of its sisters. It’s lovely, but it’ll have to wait. I’ve got an assignation with Lady Chatterley’s lover. Or would that be Lady Godiva’s?

P.S. When I was in London, my friend Nicola said “I can’t wait until Cartier completes their Heures de Parfum collection so they put out a boxed set of minis”. This made me think that Cartier should definitely consider putting out mignonettes like Hermès does with the Hermessences, or travel sprays with refills like By Kilian, so that more of us can experience their pricey but outstanding fragrances in their original packaging rather than going for splits and decants. All those in favour say “Aye”.