Vamp à NY by Olivia Giacobetti for Honoré des Prés: 50 samples to give away (and a review) 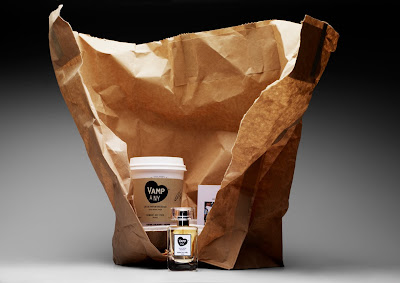 I know you’re all going to dash off to drop a comment without reading the review. So do that, but be sure to come back and find out what you’re letting yourself in for…

The 50 lucky recipients of the Vamp à NY sample giveaway will be announced on Wednesday May 26 in the evening, Paris time.

The guy sitting in front of me in the metro is lifting up his head from his newspaper for the fifth since he did a double-take when I slipped past him. No, my feminine pulchritude hasn’t suddenly gone up several notches in the heat wave. It’s the tuberose effect, pure and simple: I am in the eye of a magnetic storm unleashed by the solar wind of Vamp à NY, one of the three new fragrances composed by Olivia Giacobetti for the indie organics house of Honoré des Prés.

It isn’t just me. A floor up from the Grande Épicerie du Bon Marché, people are stopping in their tracks, u-turning to come back for a sniff at the Honoré des Prés display with its 10-feet high ziggurat of cardboard coffee cups (in which the perfumes are boxed). A middle-aged gentleman demands to be spritzed on the spot, and expresses amused dismay when he learns he is now wafting a scent called Vamp. By the time I’ve spent a quarter hour hovering over the table, three bottles have found new homes.

The marketing of Honoré des Prés is obviously spot-on for the moneyed Left Bank bohemians who patronize the designer brands of this section – Isabel Marant, Zadig & Voltaire, APC… Organic? Check. Quirky, New York-inspired presentation? Check. Funky names? Vamp à NY, Love Coco, I heart les Carottes… Check. The display table is set as though it were offering a taste of some new brand of juice, so curious customers amble up -- if you’re not being ambushed by some atomizer-wielding demonstrator, you’re more likely to hold out your wrist. People are sniffing, smiling, striking up conversations with fellow shoppers. Some are coming back with their friends.

Clearly, these are scents with a sense of fun. But they are also technical feats, and, despite their simplicity and quirkiness, accomplished perfume compositions.

Olivia Giacobetti’s first collection for Honoré des Prés garnered mixed reviews, namely because the materials chosen had rather poor longevity on skin (except for the smoky Chaman’s Party). She may now have a richer palette to work from, since organics is a quickly-developing market, but it’s more than that: she’s found her stride, and has evolved a new, specific register for the genre.

I’ll get back to the other two fragrances – the carrot and the coconut-coriander -- in another post. I just haven’t had the time to test them, because I’ve been wearing Vamp à NY for four days running in the midst of a Paris heat wave and I can’t get enough of it.

Yes, another tuberose, and, unsurprisingly, a radically different one from Bertrand Duchaufour’s Nuit de Tubéreuse. After all, Duchaufour and Giacobetti are two of the most distinctive, idiosyncratic authors working today, and even when taking on such a scenery-chewing material as tuberose absolute, they manage to stamp it with their signature. Where Duchaufour pulls the note into the dark green night-glow of roots and earth, Giacobetti sends it soaring in tropical trade winds. If you love tuberose, believe me, you need both.

Olivia Giacobetti has seldom dealt with white floral notes – the lily in Passage d’Enfer, the orange blossom of Agnès b. le b. and L’Artisan L’été en douce come to mind – and she’s certainly never done full-on white floral sexy. In Vamp à NY, she manages to open up the creaminess of the flower, to infuse it with her trademark sense of space. Ethereal Olivia has gone carnal, but she’s doing it on her terms, after tweaking the scent for a year. Clearly, living in New York suits her fine.

Vamp à NY opens with a combustible burst of rum – rum being a logical partner to the coconut facets of tuberose, and a note Giacobetti has played with, in a very different tone, for Lubin Idole. As the rum evaporates, it carries a gust of fresh, green vanilla; vanilla-as-orchid, its banana facets echoed by ylang-ylang and tiaré effects (as a point of reference, this isn’t unlike Jean-Claude Ellena’s treatment of the accord in Vanille Galante). The tuberose, somehow cleft from its wintergreen coolness and heavy animalic notes, rides on this tropical breeze in an airy, expansive, joyful sillage.

But Vamp à NY is a two-tier scent and it is nearer the skin that it unfolds its narcotic charms. The slow-burning base of vanilla, Tolu and Peru balsam, so hot it feels as though it’s been rubbed with pimiento, is truly addictive. It rises in whiffs when you move; in fact, the scent seems to be in constant flux, disappearing one minute and turning up unexpectedly to display another facet: solar/tropical; green/banana; creamy/floral; burning/balsamic. Sprayed in hair, the vanilla notes hang on for a day, but as this is all natural, i.e. without the ubiquitous synthetic musks that give volume and tenacity to the other notes, it’s pretty much one of those scents you have to douse yourself with to get the full effect.

Radiant and hot, breezy and smoldering, Vamp à NY rewrites the codes of white-floral seduction in tender, easy-going tones. You won’t find this vamp slinking around, trussed up in Dita’s kit: her eye-liner is smudged from laughing to tears, her breasts may be rolling freely under her white cotton shirt, and God knows where she mussed up her hair. She gives as good as she gets. And whatever that is, it’s fun.