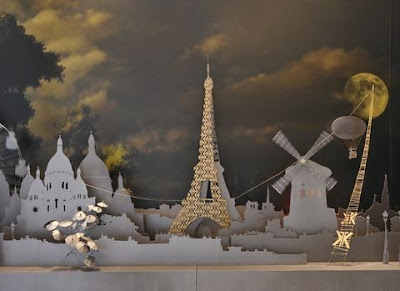 Last Thursday at Guerlain’s cocktail party for the opening of their new boutique in the Marais (more about which later), the buzz wasn’t as much about the well-received Idylle, Issey Miyake’s A Scent or Cartier’s new exclusives line, but about the opening of the Maison Francis Kurkdjian, who’d had an press day on Wednesday. In fact, that was the first question that sprang to the lips of perfume insiders: “So, what did you think of it?” Then a pause. Then: “Ah, that’s exactly what I told myself!”

If Francis K. has caused such a stir, it is because for the first time, a contemporary perfumer opens a house under his own name right under the nose of his former clients, in the heart of prestige perfumery’s main district (by contrast, when Jean-Claude Ellena launched his house, he called it The Different Company; Mark Buxton’s line has no stand-alone shop and remains confidential). And Francis K. is nothing, if not a canny promoter of his own image, which in the best of cases always annoys the profession a bit – and particularly perfume industry professionals, who only recently broke the silence about the names of their authors.

And so, what did I think?

The shop itself is a lovely little cream box in the tiny rue d’Alger, just off the rue de Rivoli. One wall is decorated by an animated cut-out cityscape of Paris seen from the roofs; the spare, modern packaging echoes the grey tin of Paris roofs, with touches of the gold gilt on the dome of the Invalides and the Pont Alexandre III.

The concept is that of fragrance as a whole-day, whole-family experience, with two eaux de parfum composed in his’n’hers versions, A Peace of Me (aka APOM) and Lumière Noire, a Cologne du Matin and a Cologne du Soir, as well as the unisex Aqua Universalis. The perfumes all come with corresponding home fragrances, candles and burning papers (the “papier d’Arménie”, is a paper impregnated with scent: you can burn it or slip it in a drawer), which reprise the dominant note of the eau de parfum. Leather string bracelets shut with a magnetic silver clasp and impregnated with the fragrances are also on offer. Mr. K. didn’t forget the children, with soaps to blow bubbles scented with pear, mint or grass.

But the real conceptual coup d’éclat is, as Octavian Coifan has developed in an eloquent post, the launch of a liquid detergent scented with Aqua Universalis. For the first time in history, a prestige perfumer puts his name to a functional product, in a sly, canny play on the incestuous relationship between clean laundry smells and “clean” (i.e. laundry) smelling fine fragrances. The result is the ultimate stealth fragrance, one you can wear even in perfume-ban locations: “Why no, I'm not wearing cologne, it’s just my clothes!”

This is perfumery as gesamtkunstwerk: from morning to night and from towels to sweaters to bed sheets, every man, woman and child in the household can waft complementary sillages. The name of the brand, “Maison”, is thus doubly relevant.

What’s at work here is more a breakthrough in concept than in perfume composition. When I visited the shop, Kurkdjian was there with two chic ladies and what he talked about was mostly the stories (each fragrance is associated with a moment in the day), the packaging and the design. About the actual compositions, not that much (of course, he knew who he was talking to).

In fact, on smelling the Maison Francis Kurkdjian fragrances, most people I talked to were essentially struck by the fact that they are re-workings of ideas he’s already developed elsewhere, around his two fetish materials, rose and orange blossom. The former has been featured in Guerlain Rose Barbare, in the two first Juliette Has a Gun, Indult Manakara and MDCI Rose de Siwa. The latter dominates Jean-Paul Gaultier Le Mâle and Fleur du Mâle, Acqua di Parma Iris Nobile and Narciso Rodriguez For Her. Admittedly, these are just part of the 40 plus fragrances FK has authored; rose and orange blossom have been part of perfumers’ armamentaria for centuries. And you can’t blame an artist for being consistent.

The general impression is not that Francis Kurkdjian has finally let loose, gone crazy, expressed his wildest perfumer’s dreams, but that he took his best ideas and went home with them, to tweak them until they expressed exactly what he wanted to say in the first place, or now that he knows better, whatever. But the fragrances – with exception of the ethereally crisp Aqua Universalis – have a more saturated effect: bursting with rich materials and romantic flourishes.

I’ll be getting back to the fragrances themselves in proper reviews (they need more individual skin time). Sometime in November, American readers will be able to form their own opinion: Maison Francis Kurkdjian will be available in several Neiman-Marcus stores across the country.Meanwhile, 1000fragrances has posted reviews of all the scents: just click here, here and here.