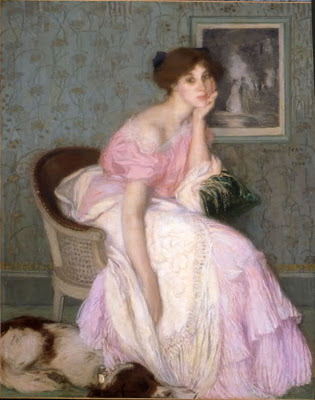 If you’ve been holding your breath for a femmed-up version of the inky, smoky, black-chocolate-y goodness that is Lalique Encre Noire, exhale. Christine Nagel’s Encre Noire pour Elle is not to Encre Noire what Guerlain Vétiver pour Elle was to the Vétiver, a reprisal of the original with added florals, but an entirely different composition. Nagel has stated that her only obligation in the brief was to add a note of vetiver to link it to Encre Noire.

But don’t go sniffing too hard for it or you’ll be hyperventilating: the vetiver in Encre Noire pour Elle is such a self-effacing little character I haven’t even been able to detect it through the power of suggestion.

Encre Noire pour Elle is essentially a pallid rose with a touch of amber, the amber being supplied by a Givaudan material called Kephalis, which also has a tobacco facet. (With L’Artisan Havana Vanille and By Kilian Back to Black, tobacco may be the new oud, which was last year’s new patchouli: as perfume is the next cigarette, with more and more public places and companies banning its use, a tobacco facet in perfume is starting to sound like an allusion to transgression). Which doesn’t mean ENpE gives off the ashtray reek of Bandit, far from it: it is, in fact, a nostalgic gauzy rose-violet floral topped off with fruity touches – bergamot, a lick of apricot from the osmanthus, and maybe that tiny drop of grapefruit is the vetiver? No relation to the new crystalline rose notes of N°5 Eau Première, Narciso Rodriguez Essence or Flower by Kenzo Essentielle, but light enough not to frighten off non-rose lovers. The whole deal is drowned in a puff of clean musk.

The lasting power (on me) is average and the sillage is a little apologetic: this could be classified as an office-friendly fragrance. The only thing that’s remotely shocking about it is its discretion compared to the distinctiveness of Encre Noire. It’s very pretty, but not in the same league. Probably the least black-smelling of all the noir-something fragrances that have been popping up.