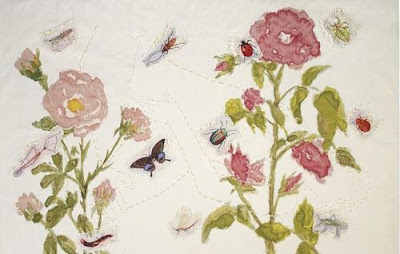 A fugue on the theme of the citrus tree…

But the fugue, a dazzlingly complex musical form in which a theme is given by a voice, then reprised by another voice as the first voice goes into a variation; then by a third voice as the first and second go into new variations (the voices can be the hands of the pianist), may not be the perfect metaphor, since the last two fragrances of Maison Francis Kurkdjian, Lumière Noire pour Femme and pour Homme, break off from the citrus/orange blossom theme to explore a rose and wood accord.

Still, it’s tempting to think of the line as a thematic whole, with its stylistic unity and pairs of fragrances than can be worn one after the other as the day goes on; you could also think of the number of fragrances, seven, as a satisfyingly mystical ensemble. And so I find it difficult to parse these and treat them as independent compositions.

The line could also be seen as a single classic composition decomposed in seven voices: though each has its own, complete pyramid, and those pyramids may overlap from one fragrance to another, they do run from the cleanest, freshest, most crystalline top notes to the darkest base notes, filled out with a common musk base.

Say Aqua Universalis, a limpid interpretation of the smell of fresh laundry, with its bitter cédrat opening, clean muguet and light-as-air musk offers the very first moment of an aldehydic perfume.

Cologne du Matin stays on the bright, clean side of the spectrum, echoing Aqua Universalis’ citrus opening but adding aromatic notes of thyme and lavender on a sweeter, slightly more substantial neroli heart and a more powdery base.

With its ample balsamic notes of benzoin and incense Cologne du Soir could be the heart and base of the fragrance; the rose of Lumière Noire is introduced.

Both A Peace of Me, “pour femme” and “pour homme”, reprise Cologne du Matin’s orange blossom with a thicker, more animalic version of the note, and Cologne du Soir’s sweet amber and balsams, and echo Aqua Universalis’s light cedar base: the feminine version is more honeyed floral, with ylang-ylang, honeysuckle and a fresh lily-of-the-valley “bubble” to open it up. The masculine version skips the added flowers and stresses the woody base: it is a bit more tenacious on skin that the feminine counterpart.

Lumière Noire picks up where Cologne du Soir’s rose left off: it is almost all heart and base notes, dirtied up with cumin, with the now-classic rose-patchouli accord leaning towards the animal-floral in the feminine (jasmine and narcissus), and the bitter-aromatic with mugwort (artemisia) in the masculine. (I’ll get back to Lumière Noire pour Femme in a separate review.)

As a whole, there isn’t one of these fragrances I wouldn’t wear, except maybe the Aqua Universalis which has too much of a clean, unisex feel for my rather more carnal tastes. I could note that the orange blossom in APOM veered towards a slightly sour note when I first tested it in the crook of an elbow, but not when sprayed on the wrist. Cologne du Soir goes immediately in benzoin-vanilla mode, which is lovely: if you love Guerlain Bois d’Arménie (not by FK: it’s a Menardo) or Flower by Kenzo Oriental, you’ll probably want to test this. Apart from the Lumière Noire pair, which demands strong commitment and a high threshold of tolerance to rose, all of these are fairly easy to wear though they are in no way noncommittal. As I wrote in my first overview of the house, the line feels as though Francis Kurkdjian expressed previously developed ideas in a more forceful way: it is consistent, very well made and it feels rich, chic and Parisian with a slight Oriental bent…

Finally, if there is a metaphor, it could be that of arabesques. After all, Kurkdjian was a dancer.

Image: The Bugs and the Lovers by Ghada Amer and Reza Farkhondeh, sourced from Moodboard