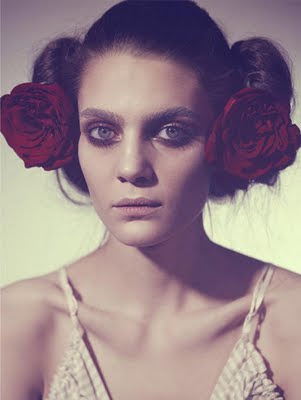 Not a month ago, I posted a rant on the ubiquity of patchouli, the peg that’s pushed in every time a perfume needs something dark-woody-gourmand in its basenotes. When it’s not paired Angel-style with fruit and caramel, patchouli’s usual partner-in-crime is rose.

Of course, when it’s done right, the patch-rose combo is a perfectly honourable, classic accord, one which Francis Kurkdjian has already pulled off in Guerlain Rose Barbare and Juliette Has a Gun Lady Vengeance – both roses with more than a couple of thorns left on.

His latest variation on the theme, Lumière Noire pour Femme, is a full-on bodice-ripper of a rose, Baudelairian in its celebration of majestic female flesh –a courtesan trussed in velvet the colour of drying blood trimmed with jet beads, hair tumbling down her back as she downs a flute of champagne. Her shawl carries the smell of the patchouli leaves it was packed with to repel the moths on its way from India. A bunch of jasmine exhales its dying breath between her breasts. A sweaty tendril of cumin rises from her corset…

That touch of reek sets Lumière Noire decades back, into the realm of classic French perfumery, with its intimation of heated bodies and sinful opulence.

The French writer Lumière Noire pour Homme brings to mind isn’t so much Baudelaire as Balzac. Not that this is a particularly Balzacian scent, but because in his novella The Girl with the Golden Eyes (perhaps Balzac’s most Baudelairian work), Henri de Marsay falls in love with Paquita, the mysterious beauty of the title, the captive/lover/protégée of the Marquise de San-Réal – who turns out to be none other than de Marsay’s half-sister… De Marsay’s fatal encounter with Paquita unfolds in the very type of boudoir -- dark, voluptuous and ornate – conjured by both versions Lumière Noire.

Pour Homme is de Marsay’s swashbuckling dandy to Pour Femme’s passionate murderess. The Y chromosome is expressed by a hefty dose of mugwort, aka Artemisia, the bitter green note also found in the archetypal butch-femme perfume Bandit. This aromatic addition pulls Lumière Noire pour Homme further into the chypre territory than its sister, towards Aromatics Elixir or Van Cleef and Arpels pour Homme (a wide-shouldered 80s leather chypre). At first, the mugwort keeps the rose tightly under wraps – as though the marquise de San-Réal had bandaged her breasts to slip into her half-brother’s slim black frock coat. Lumière Noire pour Homme manages to come off as swaggeringly masculine while never quite dispelling that hint of gender ambiguity. But maybe that’s just because we know the sister.