Narciso Rodriguez Essence: Never Mind the Juice, Just Give Me That Bottle 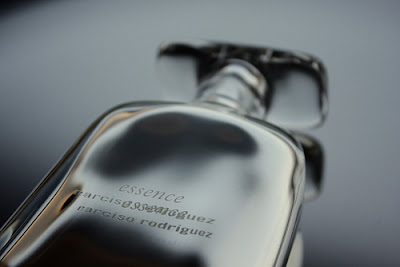 Have you ever heard me rave about bottles? No you haven’t. My template is the Chanel flacon: simple and functional. But somehow, Ross Lovegrove’s design really gets to me – it’s like a molten lab bottle filled with quicksilver. Its blurred contours suggest it’s about to morph or in the midst of teleporting. Lovegrove’s flowing organic lines appeal to my inner geek: if this is the future, I want in.

The contents? I can take’em or leave’em. Not that Alberto Morillas’ work isn’t excellent: he’s captured just what the remarkably consistent Narciso Rodriguez brand is all about – sleek, urban, no frills, very little nonsense. The essence of Narciso Rodriguez, as it were.

After the planetary success of Francis Kurkdjian and Christine Nagel’s Narciso Rodriguez for Her, with its devilishly simple, linear, clean/not clean play on musk and orange blossom, Morillas hooks another car onto the musk train: aldehydes, of the hot iron on linen with a hint of citrus variety – this is what the press kit calls “air notes”, and you can argue with the S.A. until you’re blue in the face that these are in fact aldehydes, she’ll deny it as though her life depended on it. Before asking you what they are.

The pairing of that slight, possibly illusory hint of citrus with the White Linen quote adds two more olfactory references of “clean” to the white musk sequence. Iris is the third: these people have all their bases covered. The rose which is meant to be the main theme (“radiant rose”, says Osmoz) is done with such a light hand as to be practically dematerialized. In fact, Essence could probably waft undetected under the noses of the Halifax Perfume Nazis[1]. I may buy it at the duty-free when I next visit Canada (then I get to keep the lovely, lovely Lovegrove bottle)…

[1] In case you’ve missed that episode: my lovely native country boasts the first city to have prohibited the use of any fragrant product in its municipal buildings, most of its schools and many businesses.

Image: Essay on the Essence bottle by Kurashikinote on Flickr.