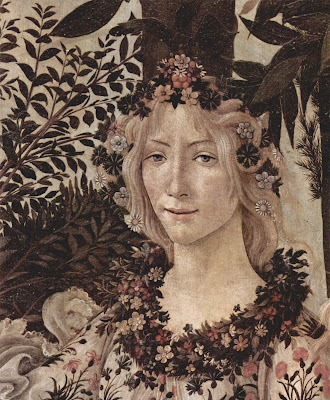 A great big bunch of muguet is sitting in the mantelpiece right now, but when I sat at the computer with my first coffee I’d forgotten it was there, and spent a couple of minutes looking for the spilt fragrance vial emitting the powerful smell in the room. True, most sprigs of muguet sold by street vendors on the 1st of May in France – where it has been traditional to offer them since, apparently, 1561 when king Charles X gave them to the ladies of his court, according to legend – only yield their delicate odor when you practically shove the little bells in your nostrils. This bouquet is clearly much better stuff: up close, the green-rosy component of the smell is more perceptible; the highly diffusive soapy-orange blossom-indolic facets unfurl from a distance.

Muguet is rather a vexed matter in perfumery. First, because the flower doesn’t yield its essence, as I’m sure you all know. Second, because there already is[1] a definitive muguet rendition, Edmond Roudnitska’s Diorissimo – which the maestro himself considered to be rather “an arabesque around muguet” than a literal olfactory portrait. Third, because the aromachemicals used to evoke muguet have been so overused in functional perfumery (the French Ajax Fêtes des Fleurs/ Fleurs Blanches is a masterpiece of the genre) that the smell of synthetic lily of the valley automatically conjures visions of spray canisters sitting atop porcelain thrones – and so do, by association, perfumes built around lily of the valley.

But in honor of May Day, I’m pulling out a couple of the muguets in my fragrance library:

Guerlain’s Muguet, found in a factory atomizer in a flea market (so it’s not this year’s “sold for one day only” limited edition), is a fairly straightforward rendition that lurches dangerously near room spray: clean, sweet and totally non-indolic. Nice, but bof (the French version of “meh”).

Parfums DelRae Début is necessarily a more complex proposition, if only because its author, Michel Roudnitska, was both burdened and inspired by his father’s colossal achievement. But like all of his compositions for DelRae, this is definitely Michel’s baby: his saturated, high-intensity style bears very little relation to the increasingly spare experiments-around-a-theme of his father. Début exudes a green, sweet, slightly fruity sappiness throughout most of its course, almost fluorescent at the outset. It is practically as much about linden blossoms, with their green/orange blossom facets, as it is about lily of the valley (though to me no one has captured yet the actual intoxicating sensation of walking on an avenue planted with linden trees in full bloom). The musk and sandalwood base boosts the animalic tinge of the bouquet and gives it a rather more robust feel than most muguet fragrances.

Patricia de Nicolaï’s Un Cœur en Mai for Parfums MDCI should by any standards be all about the quintessential May flower, and it is indeed a wistfully pretty rose-muguet accord that smells mostly of a very good quality, old-fashioned guest soap (which means it does capture that soapiness that I’m getting from my lily of the valley bouquet a yard away). As Luca Turin writes in his latest addition to The Guide, it’s surprisingly tame and old-fashioned coming from Nicolaï. I would say the same thing of her rose-mimosa-muguet Week-end à Deauville, one of her two limited spring 2009 editions for the Parfums de Nicolaï: Week-end is a little greener and mossier than Un Coeur en Mai and would probably make a wonderful room spray or candle, but in its well-behaved wistfulness, it comes nowhere near her ode to late Spring Le Temps d’une Fête in mastery and inspiration.

So in the end, I may very well celebrate the end of May Day (a picnic under the Eiffel Tower given in honor of the La Force de l’Art exhibition at the Grand Palais) by dousing myself with tuberose… Despite the animalic whiffs the great Edmond uncovered inside her cute white bells, muguet may just be a little too demure for me.

[1] Or rather, there was: cheapened by LVMH and affected by IFRA restrictions on its major compound, hydroxycitronellal, Diorissimo is now a pale shadow of its former self. And unfortunately, the vintage version spoils easily.