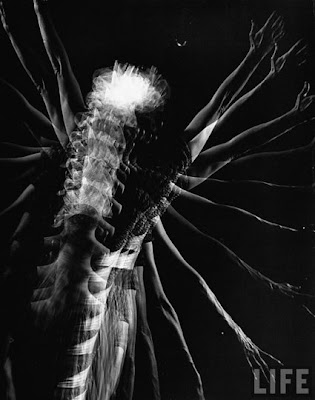 Think Isabelle Doyen is all about the delicate/vampish femininity of the Annick Goutals ? Think again. The woman’s a rocker, and rightly belongs in the ballsy-female-perfumers pantheon alongside Saint Germaine Cellier. Consider Encens Flamboyant, from Goutal’s Les Orientalistes quartet: a tough incense bordering on leather. Or the weird electric-storm crackle of the latest, Un Matin d’Orage, which was originally meant to represent gardenia in the blinding white cosmic void of 2001 A Space Odyssey, with David Bowie’s Space Oddity on the soundtrack, before it was brought back to Earth and landed in a Japanese garden.

Or better yet, think of her playground, the supremely independent Les Nez, whose founder, René Schifferle, went along with her when she suggested making a perfume that smelled of nothing, L’Antimatière. (In fact, it does have a smell, but some people are anosmic to it.)

Or, the latest case in point, the amazingly gutsy Turtle Vetiver, dubbed “an outlaw perfume in progress”: only 80 bottles have been made of it, and when that runs out, Les Nez will issue a new variation.

If you love vetiver, go ahead and get this one. This is the real deal, as close as you can get to the actual smell of essence of vetiver, which is quite astounding to discover when you’re only used to smelling its reworked version: it’s rough, raw, surprisingly pungent and camphoraceous, with a phenolic guaic wood facet. Doyen has taken that rawness full-on without trying to give it a more amiable smile. Her vetiver scowls and grumbles in bass tones. But then… then it starts to morph and display, fleetingly, the myriad facets of this incredibly rich material: a whiff of something mineral and flinty, then the salty/grapefruit-y smell that I always identify with fresh sweat…

The fragrance defies the normal course of development, in a kind of olfactory quantum physics twist: instead of deepening, it back-pedals and lightens up, sheds its powerful medicinal notes to glide into sunny citrus, before revealing, after several hours, its hidden floral heart of jasmine. You thought you were listening to Iggy Pop in his Stooges period, and then he breaks into a velvet-voiced ballad…

I don’t know how Doyen did this, and what kind of chemical strings she pulled to achieve this particular kind of illusionism, but it’s a pretty astounding feat.

P.S. If you go on Les Nez’s website, you’ll notice that instead of cringingly following IFRA’s new guidelines, René Schifferle refuses to reformulate and posts the following warning: “As for all fragrances, we recommend you test a patch on your wrist before spraying the perfume.” Another reason to support this groundbreaking micro-house.

And please read Octavian Coifan's gorgeously perceptive take on this.