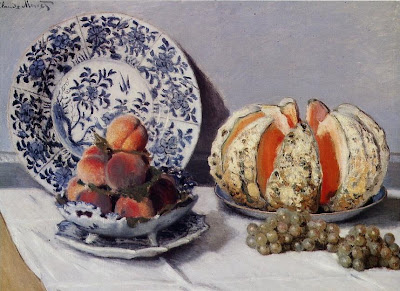 Michel Roudnitska’s compositions for Parfums DelRae have always had a generous, expansive disposition – their voice carries far and their tone is assured, much in the style of classic perfumery, but slightly amped up to cut through the contemporary olfactory cacophony.

Émotionnelle is no exception. Though the inspiration, this time, is no longer San Francisco but Paris – and more specifically, DelRae Roth’s memories of her stay in Paris – the overall feeling points southwards to Provence. Roudnitska’s contribution to Roth’s initial conception is a vibrant, saturated melon note. You can’t not think of the fragrance his father composed for his mother, Le Parfum de Thérèse, and of Diorama, which both feature a melon top note: this is clearly a tribute to the great Edmond. But smelled side by side, Thérèse and Diorama are clearly different from Émotionnelle, a bit darker in feel – they are, after all, chypres, which the DelRae is not, though in many ways it has a chypre structure (bergamot, labdanum and a vetyver-cedar base standing in for oak moss). A prune note also points to the Roudnitska heritage, but in Émotionnelle, it doesn’t have the slightly dusty, nutty facets of the nonalactone, also known as prunolide, of the Prunol base used in the original Femme: this is clearly Michel’s, and not Edmond’s work.

For the calone-haters out there: the melon, here, isn’t played for an aquatic effect. In fact, it is so realistic you can practically taste the orange flesh of the sun-ripened, un-watered fruit offered in the markets of Cavaillon in high summer, further brightened by the bergamot and tangerine that cut through the sweetness, with the lash of green of the violet leaves adding to the vegetal freshness.

More strangely, this melon displays an almost animalic facet, intensified by the other dominant opening note, honey… This melon-honey accord keeps on expanding for hours until it burst – again, the image is of a giant, ripe fruit – to release an intensely lovely, suave jasmine-amber-vanilla accord sprinkled with spices (clove, cinnamon) and cooled off with a metallic blade of ionones (violet, iris). In an interview to Sniffapalooza Magazine, Michel Roudnitska speaks of “spicy leather notes”, and though I don’t specifically get leather, I can see where he’s going: a very subtle, darker counterpoint to the sunny juiciness and heady florals, that hints at skin as lusciously as any classic, without actually repeating the classics. Great job, beautiful scent.